A widely-reported claim that a Polish nationalist march in Warsaw Saturday featured a banner calling for an “Islamic holocaust” can be traced back to an inaccurate Wall Street Journal report, a Daily Caller News Foundation investigation revealed.

Unclear and incorrect language in TheWSJ report led to rampant inaccuracies in reports published by CNN, The Washington Post, Newsweek, The Independent, The Guardian, and Vice News. These reports, most of which were traced back to CNN’s report, claimed a banner at a Polish nationalist march in Warsaw over the weekend read “pray for an Islamic holocaust,” despite the fact that the last time such a banner was seen in the Polish capital was in 2015.

Without clarifying a specific time but supposedly referring to an incident two years ago, TheWSJ claimed Saturday that the banner “appeared over a bridge in Warsaw,” although it actually appeared in the city of Poznan. This mistake, which TheWSJ corrected Wednesday, appeared to cause confusion among numerous reporters, who assumed that the banner appeared at Saturday’s rally.

“We never said that banner was at the march. I think some other outlets might have mis-reported our reporting, but it’s a question for them,” WSJ reporter Drew Hinshaw told TheDCNF in an email.

A CNN freelancer appears to have aggregated the two-year-old banner’s slogan from TheWSJ, featuring it in the second paragraph of his report for CNN, a spokesman for the news organization theorized on background in a phone call with TheDCNF.

The CNN story claimed without attribution that nationalist rioters disrupting independence day proceedings “carried banners that read ‘White Europe, Europe must be white,’ and ‘Pray for an Islamic Holocaust.'”

The corrected version of the CNN story now says “demonstrators wore masks and waved red and white Polish flags, chanting “Death to enemies of the homeland,” and “Catholic Poland, not secular.” The phrase “Islamic holocaust” can no longer be found in the piece.

Polish writer Tomasz Łysiak gave some background to the original banner on Twitter Monday, explaining that the bigoted phrase was hung over a bridge in the city of Poznan in 2015.

Here is the original photo and the date on it – 17.11.15. Two years ago! In Poznan. After a couple of hours it has been removed by the police. And You pass the fake info – that it was the slogan of Polish March of Independence 2017? @washingtonpost pic.twitter.com/iE335RKXnt

The Washington Post featured the false claim in its headline, trumpeting: “Pray for an Islamic Holocaust”: Tens of thousands from Europe’s far right march in Poland,” relying on CNN’s story. 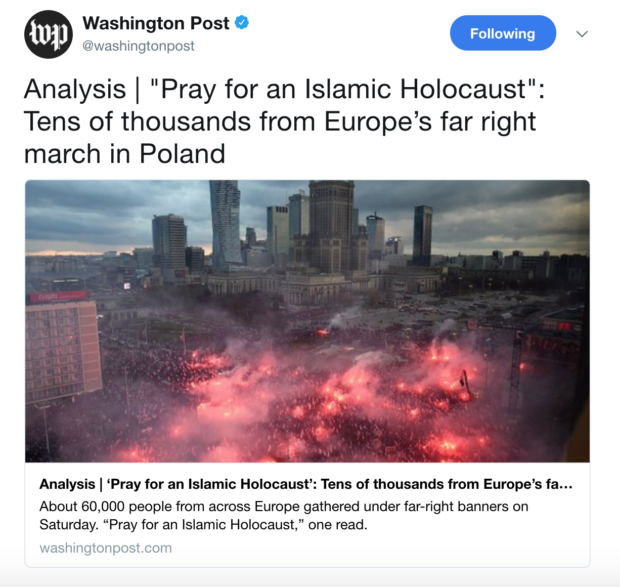 The Post has now issued a correction admitting “earlier versions of this article — including the original headline — citing a CNN report that said a ‘Pray for an Islamic Holocaust’ banner was displayed at the weekend march in Warsaw. The Post elaborated that “A similar banner was hung in another Polish city in 2015, according to local reports, but not at Saturday’s march” referencing the original banner that appeared in Poznan,

Newsweek also put the quote in its headline on the incident, citing TheWSJ’s reporting. Newsweek has not yet issued a correction.

U.K. outlet The Guardian also put the claim in its story on the riots in its third paragraph. The Guardian did not attribute the phrase and did not respond to a request for comment by press time.

Vice News also featured the claim in its story without attribution and has not yet issued a correction. Vice News did not respond to a request for comment by press time.