President Donald Trump was lambasted on Twitter Wednesday for taking two sips of water during his first speech back in The White House since he departed two weeks ago for his Asia trip.

Just 10 minutes into his speech on foreign policy, Trump paused and looked under his lectern for water. “They don’t have water,” he said. “That’s ok.” The president then saw there was a bottle of water next to the lectern, paused, and took a sip of water.

Within seconds, Twitter erupted. Hundreds of reporters tweeted about Trump having to drink water in the middle of his speech, pointing at the fact he used “two hands to drink a bottle of water.” A CNN reporter called out Trump, saying that it was “SAD!” that Trump “needed 2 sips of water to get through this speech.”

Trump needed 2 sips of water to get through this speech.

The fact that he needs two hands to drink a bottle of water is what really does it for me. pic.twitter.com/uE8Gqodnje

i like presidents who dont need two hands to drink water pic.twitter.com/NxlqH13CFe

Who drinks water like this? The puckered lips. And I particularly like how he teases himself by pulling the waterway at the last moment. #WaterGate pic.twitter.com/suQUT2rmMc 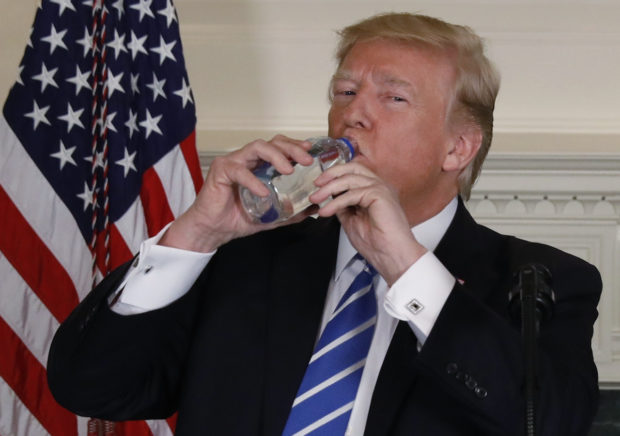 Trump declared “America is back,” in his speech and celebrated his foreign policy work abroad. He also proclaimed that he had inherited several challenges from previous administrations, including trade deficits and the spread of the Islamic State. But reporters did not focus on his speech.

The president ran through his several foreign policy trips and confidently declared that he has implemented his pledge from Inauguration Day. “My fellow citizens, America is back and the future has never looked brighter,” Trump declared during the closing of his speech. (RELATED: Trump Takes Foreign Policy Victory Lap In Speech)