There are going to be multiple coaching openings in the SEC, and Washington State coach Mike Leach needs to take one of them.

Leach is possibly the most entertaining person to ever get involved with college football. The guy is grade-A entertainment for everything on the field and outside of football.

He’s never met a question in a press conference that he didn’t love.

Mike Leach has earned a permanent spot in the “Which 5 people would you invite over for dinner” gamepic.twitter.com/xhuS0mJCte

Mike Leach on the great candy corn debate: “It’s like fruitcake. There’s a reason they only serve fruitcake once a year.” pic.twitter.com/Kf7pi3LxNQ

Nick Saban and Alabama currently own the SEC. It’s essentially Saban coaching against a group of highly paid gym teachers. There is no comparison.

Leach could change all of that. He’s the exact opposite of everything that Saban and company represent. Alabama is really rigid and buttoned up. Leach prefers winning games and talking about Big Foot. Could you imagine the rivalry that could grow if the current WSU coach took his talents south of the Mason-Dixon line? It would incredible. 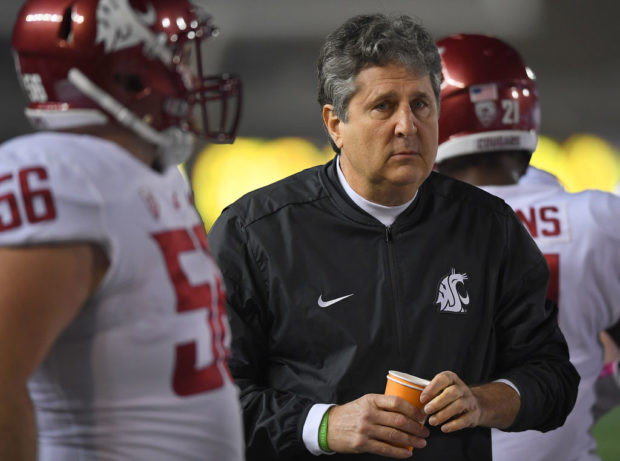 BERKELEY, CA – OCTOBER 13: Head coach Mike Leach of the Washington State Cougars looks on while his team warms up during pregame warm ups prior to playing the California Golden Bears in an NCAA football game at California Memorial Stadium on October 13, 2017 in Berkeley, California. (Photo by Thearon W. Henderson/Getty Images)

He would be an incredible fit at Tennessee, Arkansas, Florida or Ole Miss. Any of those schools would be incredibly happy to have him onboard.

I don’t know where Leach will end up, but I find it really hard to believe he stays at WSU for another season. He’s become way too hot of a commodity. All we can hope for is that he shows up in the SEC, and starts destroying people. I would pay so much money to watch him beat Alabama and then opine about the Civil War. I can already imagine the headlines right now.

Please God, get this done. Do it for the people and football fans everywhere.