We learned last week that tribe trumps truth when it comes to sexual harassment allegations against our political leaders. Partisans stick by their pols and their pols stick to their lies.

The latest politician alleged to be a sexual harasser is none other than Democratic Sen. Al Franken, who famously wrote a book called, “Lies: And The Lying Liars Who Tell Them.”  Last week we learned it was actually an autobiography

Of all the national names to pop up as alleged harassers, I’ve only known two: President H. W. Bush, for whom I worked as a speechwriter, and Franken, who I met through Arianna Huffington when they had their skit “Strange Bedfellows” on Saturday Night Live. (This was back when Arianna was supposed to be a Republican.)

Franken and Bush couldn’t have been more different. President Bush was unfailingly kind and gracious to all, treating everyone as fellow Americans, not as partisan allies or enemies.

Though my interaction with Franken was much more limited, it turns out to haven been identical to the interactions had by those who know him well. Franken was unfailingly mean and hyper-partisan, with a special ire reserved for women on the right.

Which is why when I listened to the full account of Leeann Tweeden’s story of being harassed by Franken, it was impossible not to believe her.

Just look at the photos. I’m not even talking about the infamous photo of Franken groping a sleeping Tweeden. If we’re going to treat what happened in a behind-the-scenes rehearsal as a he-said-she-said, then let’s look at the “She” and let’s look at the “He” in question. 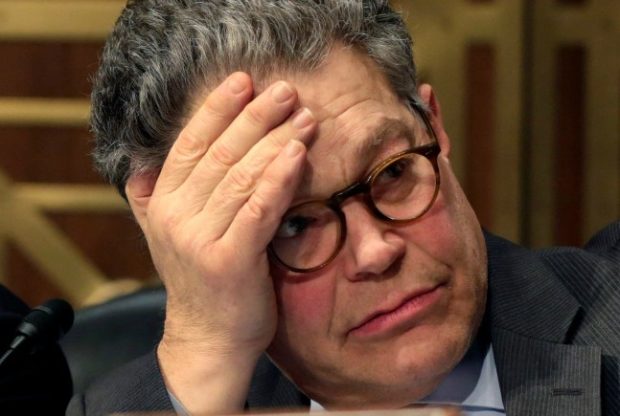 She says that He forcibly tongue-kissed her during a sketch rehearsal for a USO tour a few years back.

He says: “I remember the rehearsal differently.”

Meaning, either (A) She is simply lying, or (B) He doesn’t remember having a soul-kiss with her.

The latter strikes me as extremely unlikely. In fact, I think if Al Franken ever had his tongue inside the mouth of Leeann Tweeden, even briefly and against her will as she claims, it was probably the most exciting, the most memorable thing that’s ever happened to Al Franken in his entire life.

And what about Leeann? Is it possible that such a trivial incident simply slipped her mind, that in all the excitement of a USO tour she simply forgot that Al Franken grabbed her by the back of the head, forced his open mouth over hers, and then stuck his tongue in?  Well, sure, if you believe that would a woman like Leeann Tweeden could simply forget the single most horrifying incident of her entire life.

But speaking as a woman, I kind of doubt it.

And besides, what Al Franken did to Leeann Tweeden — for some of which we do have photographic evidence — is to my mind so much worse, particularly if judged by the standards of feminist interpretations of the whole spectrum of sexual aggression against women. Think of the many times you heard feminists say that rape and sexual assault isn’t about sex but power — about degrading and humiliating a woman, not simply a failure to discipline one’s out out-of-control sexual desires.

Actually, I think most of the time it is about sex. Just take the accusations against Roy Moore. He wasn’t trying to degrade these girls. He was trying to gain pleasure sexually at the expense of their innocence. He was trying — as all sexual harassers try — to get something for nothing. Certainly, that’s been the case in my own experiences. The times teachers, bosses and donors crossed boundaries with me were not in an effort to degrade me, but to take advantage of the power differential in our relationship to get something — intimacy — for nothing.

Al Franken’s treatment of Leeann Tweeden may have started as sexually motivated, but it ended with a desire to humiliate and demean her — the classic, feminist-defined motivation of a male sexual harasser.

In all the buzz about the photo of Al Franken with his hands on the breasts of a sleeping Leeann Tweeden, pundits are once again missing the point.  It doesn’t matter if his hands were on her or just hovering. What matters is that he was seeking to objectify and degrade his victim. He did this when she was at her most vulnerable — sleeping.

Why? What was his motivation? Was he palling around with his new buddy, with whom he’d just concluded a professional, productive and positive working trip? No. He was doing it to the woman who had said “No.”  Who he violated with a forced kiss, after she had said “No.”  Now, here was wacky Al, getting the last laugh. Getting in his grope after all.

And in so doing, Franken, a self-defined defender of women and self-proclaimed general fighting back against the GOP’s fictional “War Against Women,” revealed himself for the fraud he is.

Jennifer Grossman is the CEO of the Atlas Society and a former presidential speechwriter. She was also Senior Writer for the National Commission on Economic Growth and Tax Reform and author of its final report, “Unleashing America’s Potential,” in 1996.