As we approach the holiday season, only one thing is more guaranteed than overplayed Christmas music. That is, of course, all the delicious pies and baked goods found at the table. Unfortunately for Americans, there is a government program that artificially elevates the cost of sugar, making those wonderful deserts more expensive.

The U.S. Sugar Program is an outdated dinosaur of a program which offers taxpayer-funded loans to sugar conglomerates. The program was originally implemented to protect farmers’ incomes during the Great Depression, but now the sugar program remains the only commodity program without comprehensive reform in more than 80 years. The program keeps the price of domestic sugar almost double the world price.  So, when you go to the store to buy a snack cake or anything sweetened, you pay much more.

In a 2017 study, the American Enterprise Institute concludes that the U.S. Sugar Program “is a protectionist scheme destined to transfer income to sugar growers and processors at the cost of sugar users and consumers.” The study projects a cost of up to $3.5 billion; which breaks down to an annual average of $70 million per state, in mostly higher grocery costs.

This amount will come out of everyone’s holiday gift fund.

In order to keep such a costly program in existence, American beet and cane sugar cartels have been throwing massive amounts of cash around Capitol Hill to keep the program alive. Both Republicans and Democrats in Congress receive money from these cartels.  It seems that for some members of Congress, the gifts came early.  The following Sweet 16 senators and representatives are deep in the pocket of the sugar cartels: 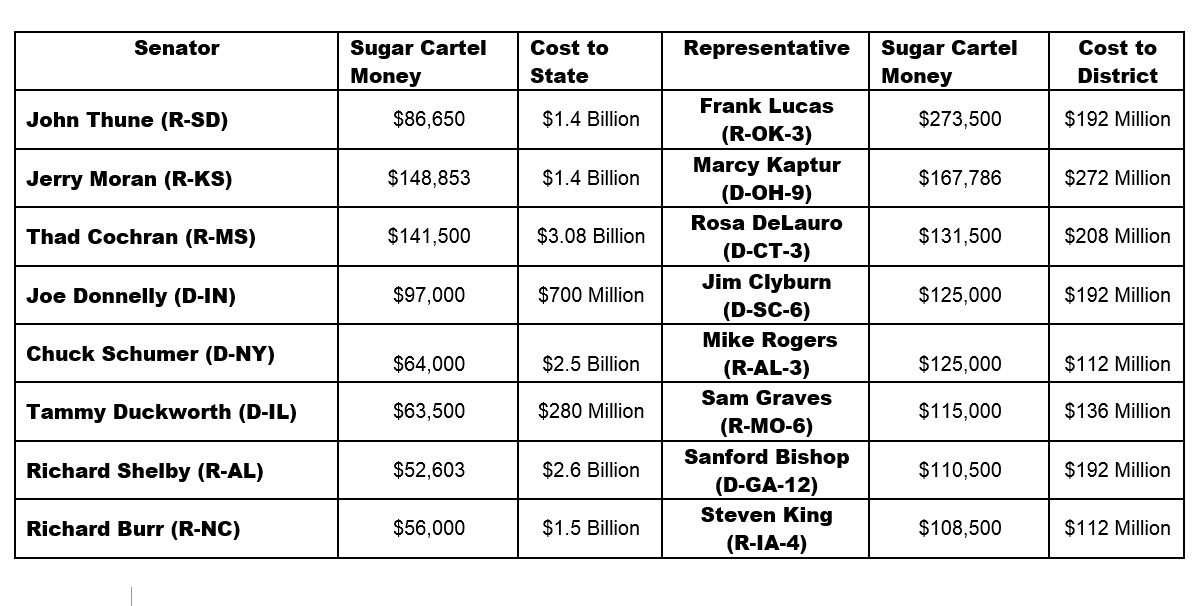 The large amounts of money in the columns next to the names of legislators are an estimated grocery costs to each state and district because of their elected representatives respective voting records on reform. The numbers are a combination of the average cost per state multiplied by a member’s years in office.

A recently-introduced bill could give taxpayers a gift. Representatives Virginia Foxx (R-NC) and Danny Davis (D-IL), as well as Senators Jeanne Shaheen (D-NH) and Pat Toomey (R-PA), have introduced the bipartisan Sugar Policy Modernization Act. This bill will finally reduce the burdens on American taxpayers, consumers and manufacturers in the food industry.

Nicholas A. Pyle is the president of the Independent Bakers’ Association, an international trade association that fights to protect the interests of mostly family owned wholesale bakers and allied trades. For more information about IBA and sugar program corruption, visit SugarRefund.com.