In a rather unprecedented move, CNN has decided to skip the White House Christmas party.

CNN said in a statement on the boycott:

“CNN will not be attending this year’s White House Christmas party. In light of the President’s continued attacks on freedom of the press and CNN, we do not feel it is appropriate to celebrate with him as his invited guests. We will send a White House reporting team to the event and report on it if news warrants.”

The cable news network has been one of President Trump’s favorite targets among the media.

However, it was one of CNN‘s favorite targets, WH press secretary Sarah Huckabee Sanders, who got the last laugh on the subject. On Twitter, Sanders responded to the CNN news by saying “Christmas comes early! Finally, good news from CNN!” 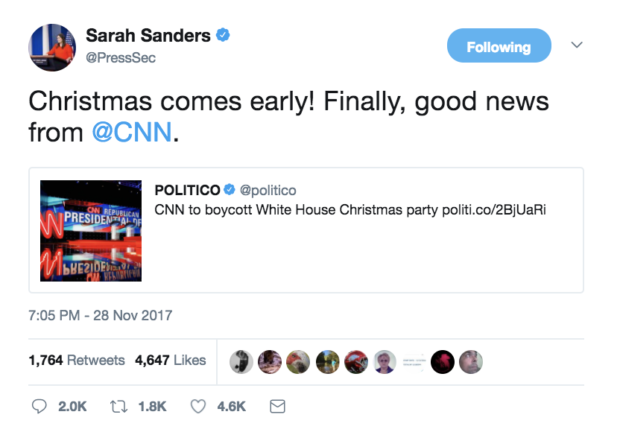 The Trump administration vs. CNN feud is long from over.