People across the Twittersphere and other social media platforms are directing a number of highly vile, and even racist comments toward Federal Communications Commission Chairman (FCC) Ajit Pai.

Many internet users are apparently trying to make their cases that internet regulations imposed under the Obama administration — colloquially referred to as “net neutrality” — are beneficial by starting Twitter trends like “#AjitPaiSucks” and posting other extremely derogatory comments against Pai — all without even attempting to delve into the nuances of telecommunication policy. 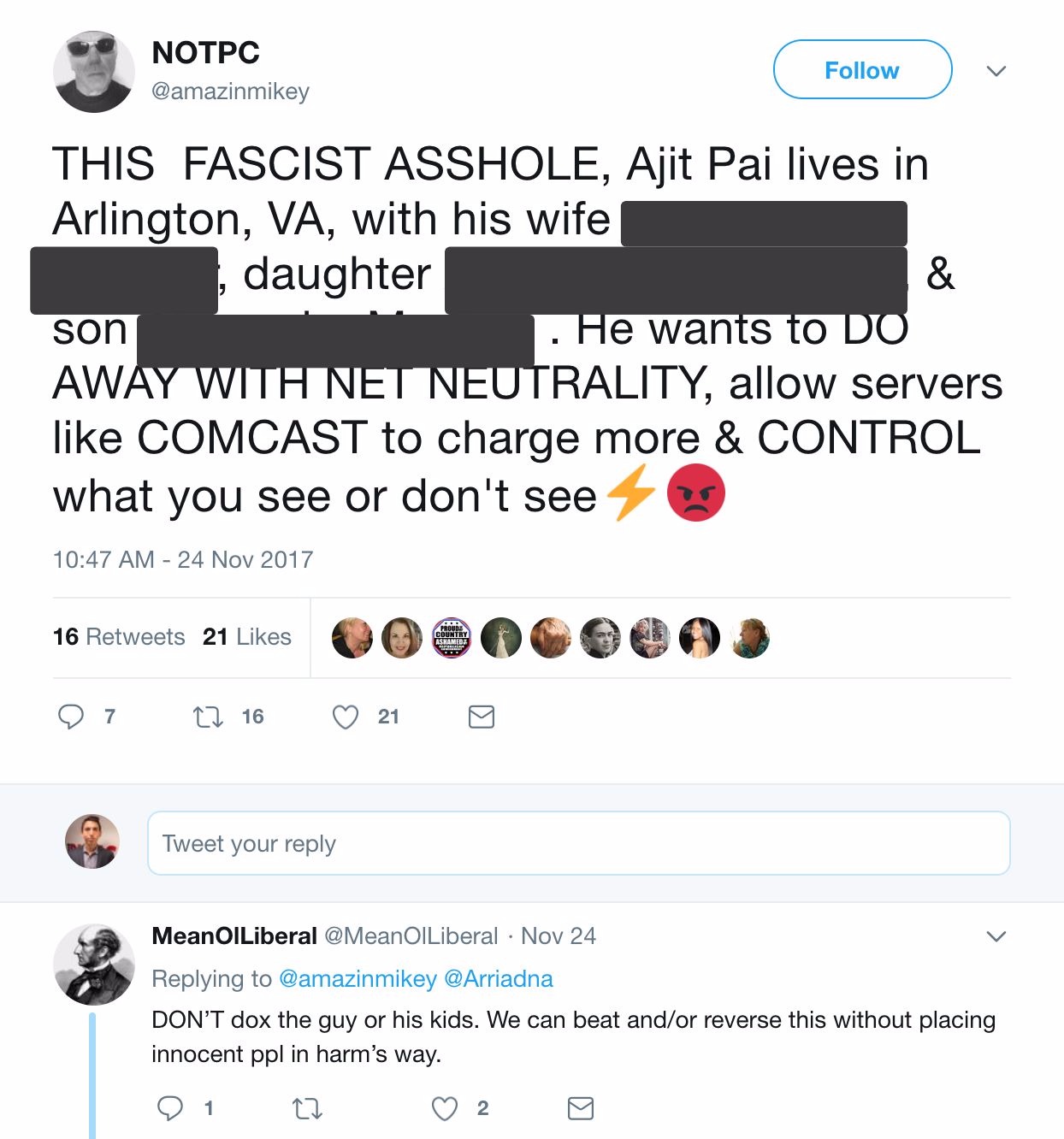 A screenshot of a Twitter user with the full names of Pai’s wife, daughter, and son redacted by The Daily Caller News Foundation.

Ajit Pai comes out as a gay man after being accused by microtransactions of sexual harassment https://t.co/uopk6b82If

@AjitPaiFCC When going down on the Indian, Brian encountered a strong taste of curry. He proceeded to violently vomit onto Ajit’s cherry Pai.
48651

Ajit Pai is the type of Indian guy who eats dosa with a fork. #AjitPaiSucks

@AjitPaiFCC if you loved ur kids u would quit the job.. Please do it for them …. Wait, u still there? Look now documented proof u care more about your career than your children lmao.

Also, I don’t care if Ajit Pai’s kids are being harassed over what their dad is doing to kill Net Neutrality. Maybe he should have thought of the consequences of selling his soul to the highest bidder.

BREAKING: Per sources, the Indian delegation have acquired Millie Bobby Brown from the white delegation in exchange for Ajit Pai and Priyanka Chopra. pic.twitter.com/aRz35uIr0f

We, the people of the Indian delegation, formally denounce Ajit Pai of all his brown rights, and trade him away to the white delegation for cash considerations. https://t.co/y0yJxSO6nE

Let it be known that the FCC head, Ajit Pai, has lost his brown/south asian community card.

Berin Szóka, president of TechFreedom, was also able to identify and subsequently highlight another grotesque characterization of Pai, which included a highly demeaning caricature of Pai that is arguably racist.

And it wasn’t just on Twitter. Commenters submitting feedback on the FCC’s official public filing system left very racist comments, despite the intention to create fruitful discussions about policy.

“F uck you Pai. Fuck ing brown immigrant comin over here and tryna fu ck over our american freedoms. GO BACK TO YOUR COUNTRY YOU DIRTY SNEAKY INDIAN,” reads a comment from a user listed as “Jeff.”

“Please keep net neutrality. Verizon, Comcast and other douchebags will fight this… but keep in mind: We all have the power to murder Ajit Pai and his family,” reads another comment. “Jk Jk. But for real, we do. Anyways, just keep it neutral because it’s the right thing to do, and because Ajit Pai is a giant cunt with a giant, stupid ass mug. I hope he misplaces it… in his asshole. Thanks much love.”

While some of the people who posted such content on Twitter don’t have many followers, the conduct is in some ways emblematic of a larger grassroots movement, many members of which are from the far-left of the ideological spectrum. A number of activists, for example, targeted Pai earlier in the year by staking out his home on Mother’s Day. Some of those protesters, including the leaders, have highly suspect histories, including that of violence.

Evan Greer, campaign director at the advocacy organization Fight for the Future, lists on her LinkedIn profile that she once served as Media Strategy and Outreach Coordinator for the Tarek Mehanna Support Group. Mehanna planned to shoot up a shopping mall in Boston, according to authorities. He was later convicted on charges that he conspired to kill Americans and was sentenced to 17.5 years in federal prison. And more activists — who aren’t clearly a part of the same loose coalition, but are certainly part of the same side of the debate — left cardboard signs outside Pai’s home Saturday. The inscribed posters not only included the exact names of Pai’s children, but directly asked the chairman if his kin will ever be able “to look you in the eye again.”

Another adjacent one read, “They will come to know the truth. Dad murdered democracy in cold blood. And for what?! It’s not too late for you, Chairman Pai. You don’t have to be evil.” (RELATED: Internet Activists Turn To Billboards To Battle Congress)

“Here we go again – just as we saw six months ago from people like John Oliver, Chairman Pai is once again fair game for personal and hateful attacks from the vitriolic left,” Matthew Kandrach, president of the nonprofit Consumer Action for a Strong Economy (CASE), said in a statement provided to The Daily Caller News Foundation. “The disgusting comments and vile threats being made against Chairman Pai and his family have achieved a new low in the public discourse.”

Kandrach, whose organization openly applauds Pai’s decision to repeal, wishes arguments could be centered around the intricacies and nuances of actual policy.

“It’s wholly unfortunate that many who support government regulation of the internet cannot debate the issue honestly, but resort to the basest instincts of their nature to smear an honorable man working to serve the public good,” he said.

Fred Campbell, director of Tech Knowledge and a professor at the University of Nebraska College of Law, agrees.

“The repeated racist attacks against FCC Chairman Ajit Pai and his family in their own home during the holiday weekend are horrific,” said Campbell. “The perpetrators of this villainy should be ashamed. These attacks aren’t net neutrality advocacy. They are terrorism.”

Even Slate, a liberal publication that for the most part is openly against Pai’s decision to repeal net neutrality rules, wrote an article titled, “Racist, Threatening Attacks on FCC Chair Ajit Pai Won’t Save Net Neutrality,” meaning they aren’t good for the contingent trying to keep the internet regulations in place.