The Hwasong-15 ICBM is much more powerful than the ICBM tested twice successfully in July. Some leading experts estimate the range could be more than 8,000 miles, putting all of the continental U.S. within striking distance. The range will, however, vary greatly depending on the weight of the warhead.

JUST IN: North Korean TV has broadcast video of the launch of the Hwasong-15 rocket. pic.twitter.com/9JCSyhX7Bz

The weapon is carried on a massive indigenously-produced nine-axle launch vehicle, a breakthrough for a country that has in the past relied on imported trucks. While it is clear that the trucks are variations of Chinese trucks, this could represent a leap forward for the country’s heavy launch vehicle development program.

Furthermore, the missile is big, much bigger than many experts expected. “I believe one of my professors would have referred to it as a big honking missile,” said Scott LaFoy, an imagery analyst for the specialist website NK News, told The Washington Post. 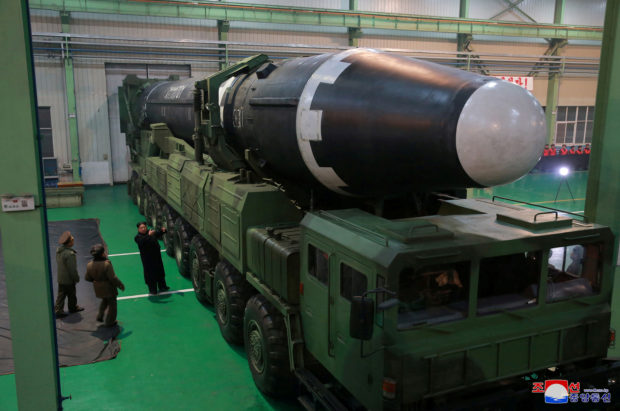 The first stage has two engines, and the second stage appears to be carrying much more fuel. “The combination of those two things means it really is a new, more capable missile,” David Wright, a physicist at the Union of Concerned Scientists told The Post.

Additionally, the nosecone is blunted compared to the Hwasong-14, the ICBM North Korea tested this past summer. The new design could potentially help the North overcome some of the re-entry vehicle problems it has faced in the past by reducing the stress on the tip, increasing the survivability of the warhead.

And, to top it all off, there is evidence the missile uses a more advanced steering method that many suspected was beyond the North.

North Korean dictator Kim Jong Un declared Wednesday that it has completed its nuclear program (although continued testing is expected), asserting that its new ICBM can “reach all of the U.S. mainland.”

In response to North Korea’s latest act of defiance, U.S. Ambassador to the United Nations Nikki Haley warned that North Korea is pushing the world closer to war through its provocative actions. “We have never sought war with North Korea and still today we do not seek it,” she said at an emergency U.N. Security Council meeting Wednesday, “If war does come, it will be because of continued acts of aggression like we witnessed, and if war comes, make no mistake, the North Korean regime will be utterly destroyed.”