North Koreans — both dead and alive — keep washing up on Japanese shores, according to Japanese media reports.

The Japanese Coast Guard has been busy this month dealing with ghost ships filled with skeletonized bodies and unexpected visitors reportedly from North Korea. As of Tuesday, 26 wooden ships had appeared drifting just off or washed up on Japanese beaches, according to the Asahi Shimbun. In past months, the number was around five, but the frequency has risen.

A North Korean boat drifted ashore in Yurihonjo, Akita Prefecture last week, and the crew of eight North Korean fishermen were taken into police custody for questioning. “Our boat broke down after we left North Korea about a month and half ago to catch squid,” one told authorities, expressing a desire to return home. Another boat filled with the bodies of eight dead sailors and believed to be of North Korean origin showed up on the beaches in Oga, Akita a few days later. Two more dead bodies, also suspected North Korean sailors, were discovered Monday amid wreckage in Sado, Niigata Prefecture, the Japan Times reported at the time.

The Japanese Coast Guard found another North Korean vessel Wednesday drifting about in waters just off Hokkaido, and the government is investigating the 10 North Korean crew members, according to the Japan Times. 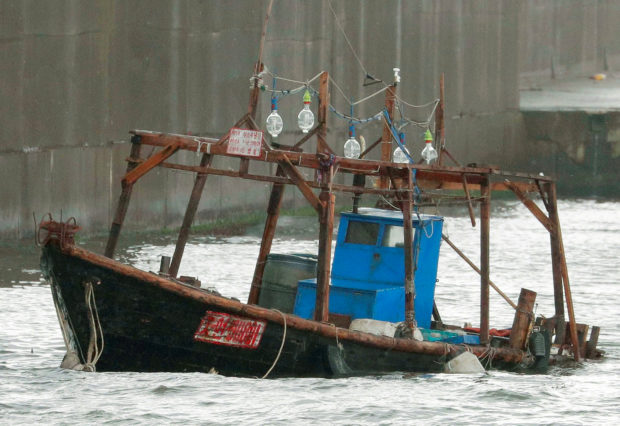 A wooden boat, which according to a police official carried eight men who said they were from North Korea and appear to be fishermen whose vessel ran into trouble, is seen near a breakwater in Yurihonjo, Akita Prefecture, Japan, November 24, 2017. Mandatory credit Kyodo/via REUTERS

More than 50 boats of suspected North Korean origin have appeared on or just off the Japanese coast this year, and this has been a problem for years. The Japanese Coast Guard has reportedly discovered 300 North Korean ships since 2013, UPI revealed.

North Korean fishermen are often encouraged to sail far out to sea, often into the waters of other countries, to pursue big catches, but they frequently sail with limited resources to prevent defection. Also, the ships tend to be of shoddy design and construction, making mishaps and accidents more likely. Seafood has long been a source of foreign currency for the regime, although new United Nations resolution target the sale of North Korean seafood to cripple the economy.

1
Trump Snaps At Jim Acosta’s One-Liner On 'Truth' In India — 'You Ought To Be Ashamed Of Yourself'
Politics
2
Bloomberg Advisor On Sanders: He Said 'Toddlers Should Run Around Naked And Touch Each Others' Genitals'
Politics
3
Joe Biden Tells Crowd He’s ‘A Candidate For The United States Senate’
Politics
4
Here's What The Lead Roger Stone Juror Wrote In Her Jury Questionnaire
Politics
5
At First Press Conference In Months, Trump Tears Into Schiff For Trying To Steal 2020 Nomination From Bernie Sanders -- Full Statement
Politics