One of the dumber controversies between the White House and the press occurred over the Thanksgiving holiday when White House press secretary Sarah Sanders tweeted a photo of a pie she baked for her family. 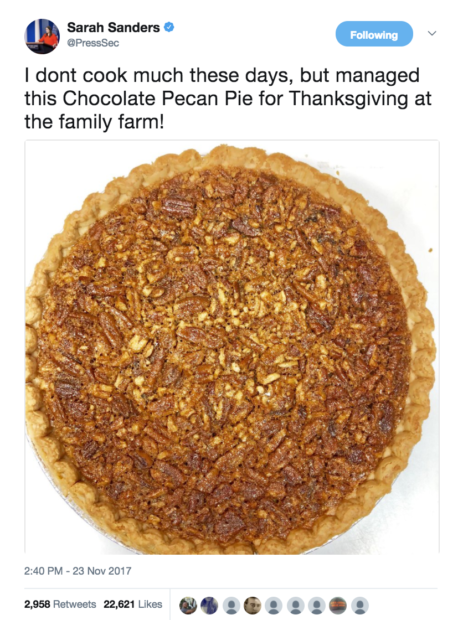 White House reporter April Ryan instantly began questioning if Sanders did indeed bake the pie. She tweeted the conspiracy theory, asking Sanders to tweet a photo of the pie on a table. “I am not trying to be funny but folks are already saying #piegate and #fakepie” Ryan said, “Show it to us on the table with folks eating it and a pic of you cooking it.”

Sanders responded to Ryan, saying she will cook one for her.

However, the feud is clearly not over.

Sanders was the guest of honor at the American Principles Project’s Red White and Blue Awards Dinner in D.C. Wednesday night. When asked onstage about #piegate by moderator Terry Schilling, Sanders torched the conspiracy theorists.

“Being from the South, I think one of the most offensive things that you can accuse somebody of is a store-bought pie,” Sanders said to applause. “Not only did I make it this Thanksgiving, I make it every holiday for my family, including at Christmas I used to make it for all of my neighbors on my street.”

“I usually make it with bourbon,” Sanders explained. “I have since this week purchased the ingredients to make many more.”

Watch the comments below: