The embattled Minnesota Democrat has spent much of the last month reeling from a stream of allegations against him by multiple women of inappropriate touching and groping. In total, five women have now come forward to say that they were sexually assaulted by Franken.

While this behavior is disturbing enough for a sitting senator, there is a dark trend to Franken’s alleged predatory habits that makes them even more depraved. It’s becoming clear that Franken apparently used trips to American war zones as opportunities to assault women.

Two of the five incidences of Franken’s alleged sexual assault occurred while he was on a USO tour. The USO has a long-standing, multigenerational tradition of bringing uplifting entertainment to troops on the front lines. But the active duty women and reporters who interacted with Franken on these tours say they got a very different type of ‘lift’ from the D-list comedian. Let’s recap:

First, there was Leeann Tweeden. Tweeden, a California news personality, traveled to Iraq in 2006 on a USO tour in order to entertain troops.  Tweeden, the daughter of an Army veteran and wife to an Air Force pilot, holds a deep appreciation for the American soldier.  This was her eighth tour to visit troops. Instead of being allowed to serve the troops, Tweeden ended up getting sexually assaulted by Franken. Just read her horrific retelling of what happened: 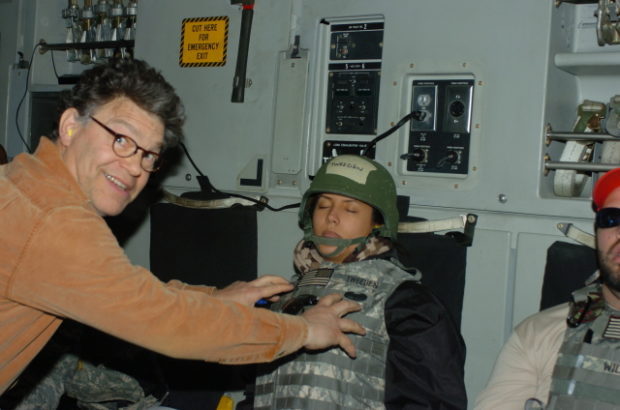 You knew exactly what you were doing. You forcibly kissed me without my consent, grabbed my breasts while I was sleeping and had someone take a photo of you doing it, knowing I would see it later, and be ashamed.

Today’s allegations against Franken are shockingly worse. Franken is accused by army veteran Stephanie Kemplin of groping her breast during the photo opp. The only reason Franken was near Kemplinher was because he was on a USO tour and Kemplins was an active-duty soldier, serving her country in a war zone during wartime. Just read her horrific retelling of what happened: 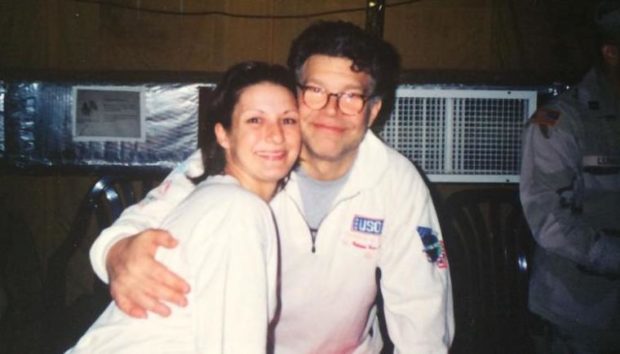 When he put his arm around me, he groped my right breast. He kept his hand all the way over on my breast. I’ve never had a man put their arm around me and then cup my breast. So he was holding my breast on the side. I remember clenching up and how you just feel yourself flushed. And I remember thinking — is he going to move his hand? Was it an accident? Was he going to move his hand? He never moved his hand.

Instead of serving our troops, Franken was allegedly sexually assaulting them. The fact is, Franken used his celebrity status to get to US war zones and proceeded to allegedly assault vulnerable women while there.

Franken has often bragged about his support of the troops. Unfortunately, no one wanted the kind Franken was apparently willing to provide.