Nick Saban might have the perfect opportunity to get back in the NFL after the New York Giants fired Ben McAdoo.

There were rumors over a year ago that Saban might have had interest in the Giants job, and now would be the time to get back in if he’s ever going to leave the college game. 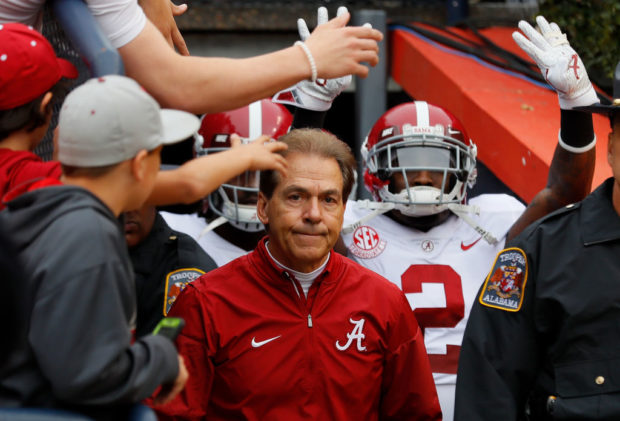 AUBURN, AL – NOVEMBER 25: Head coach Nick Saban of the Alabama Crimson Tide leads his team on the field prior to the game against the Auburn Tigers at Jordan Hare Stadium on November 25, 2017 in Auburn, Alabama. (Photo by Kevin C. Cox/Getty Images)

I have no idea if Saban has any interest in coaching in the NFL ever again. His tenure with the Miami Dolphins was lackluster to say the least. Now he’s running an absolute machine down in Alabama with the Crimson Tide. Not sure it’s worth it for him to leave.

He’s being paid a bank vault annually to win championships on a very consistent basis. I don’t see any reason for him to leave, but now would be the time to do it if it’ll ever happen.

The Giants can snag a top QB in the draft, Saban can build him up and he’ll have another shot at NFL glory. If he can’t get it done now then it’s probably never going to happen.