The Justice Department spent $6.7 million dollars on the Russia investigation during the first four months of Special Counsel Robert Mueller’s tenure, according to an expense report released by the Department of Justice on Tuesday.

Of that amount, $3.2 million was expended solely by Mueller’s office. Another $3.5 million was incurred by the Justice Department in support of Mueller’s investigation, which was opened on May 17.

The expense report, which tracks spending through the end of September, notes that the Justice Department expenditures would have been incurred “irrespective of the existence of the SCO,” the Special Counsel’s Office.

The majority of the expenses went to salaries and benefits for Mueller’s team, which consists of around two dozen investigators, prosecutors and administrators.

The second-largest expense was for the acquisition of equipment for the investigation. 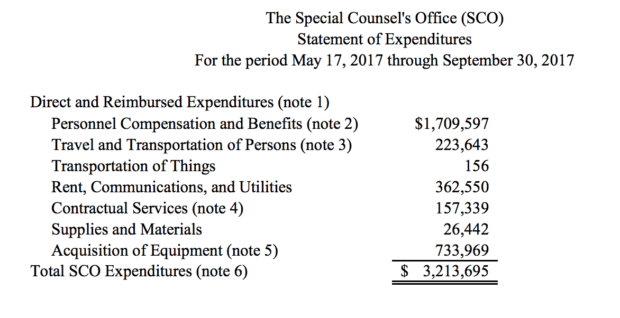 The Special Counsel’s Office also spent more than $111,000 on IT services and nearly $25,000 for transcription services for its interviews.

The Mueller investigation’s cost has already surpassed the expenditures for a special counsel probe conducted during the George W. Bush administration into CIA leaks of the identity of Valerie Plame. That 45-month investigation, led by Patrick Fitzgerald, cost $2.6 million.