As California is burning from wild fires and the lives of tens of thousands of Americans are devastated, there is one person who isn’t too upset over the destruction of at least one home.

Neera Tanden, the president of the liberal Center for American Progress and frequent cable news commentator, was more than happy that “karma” had burned down the home of Rupert Murdoch, the executive chairman of News Corp, which owns Fox News.

Reacting to the news of Murdoch’s misfortune, Tanden retweeted the information and added, “There’s a God. And she’s unhappy.” 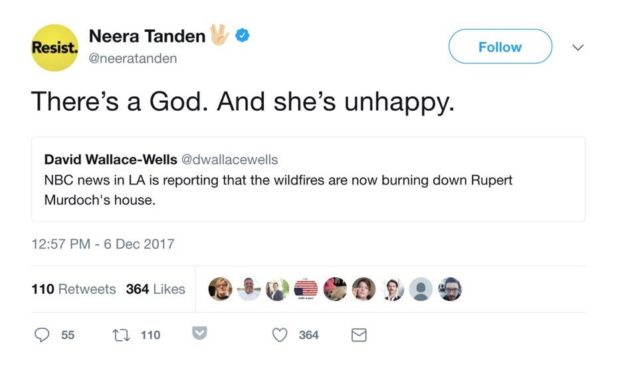 Tanden was then asked by a Twitter user, “You seriously hope that your political appointees have their homes burned down?”

You seriously hope that your political appointees have their homes burned down? Classless!

In response, think tank leader claimed no malice, just the embrace of “karma.”

I do not hope for such things at all. I just note the Karma.

Bowing to pressure and public backlash, Tanden deleted her offending tweet, claiming she felt “badly about it.”

I’m deleting this tweet. It wasn’t funny when so many are hurting and scared. Feel badly about it.

Tanden the dropped the subject, not responding to any criticism of her “joke.”

In addition to running the Center for American Progress, Tanden is a veteran of the Barack Obama and Hillary Clinton campaigns and delivered a speech at the 2016 Democratic National Convention.