The purpose of the trip was to give the First and Second ladies time with aide workers and first responders who have been working nonstop to help those affected by Hurricane Harvey. Harvey made landfall in August and devastated communities in the south of Texas. Melania and Karen Pence made very important stops throughout the affected communities, but one stop above all others signaled that the two really cared for the people of Texas. Along with visits to aide stations and rebuilding efforts, the First Lady made a stop at Whataburger.

Whataburger, a Texas burger chain, has near mythical levels of popularity in the state. It’s borderline religious following cheered with glee after reading reports.

The pictures are just as good.

@FLOTUS Melanie Trump at the Whataburger my aunt works at in Corpus. She’s down here helping those affected by Harvey. pic.twitter.com/wz6ih17QZ3

On our way out of town, @FLOTUS & @SecondLady decided to stop in to @Whataburger for some lunch! The American chain opened its 1st restaurant in Corpus Christi, TX in 1950! pic.twitter.com/Jh7iYaD0I6

Even the press had nice things to say about the visit since they were the direct beneficiaries of the stop. A reporter on the trip says Whataburger was delivered to the press van, compliments of the first lady. 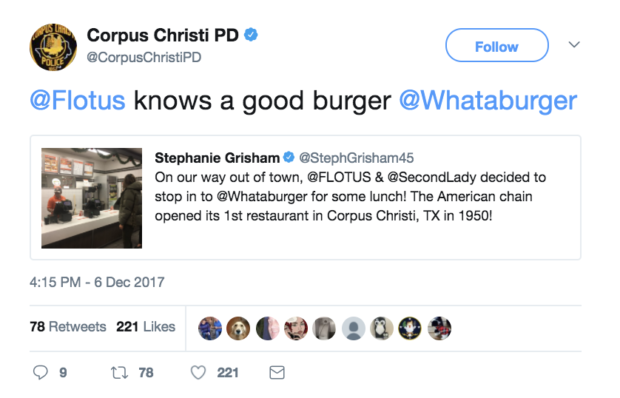 So did the governor of Texas. 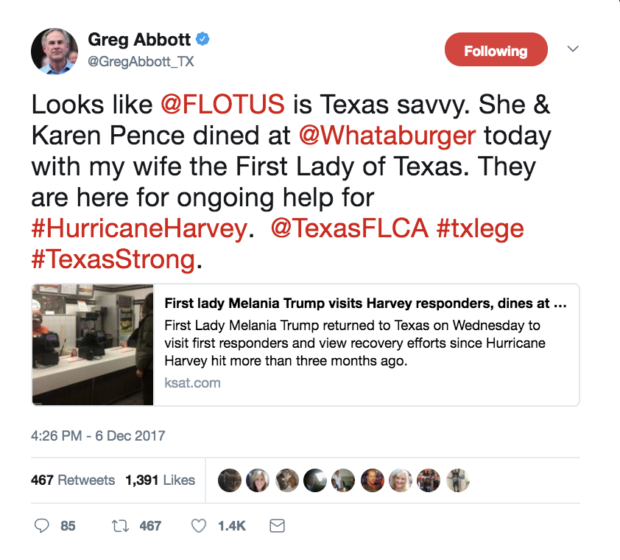