WASHINGTON — David Brock’s Media Matters for America appears to be granting hundreds of thousands of dollars in charitable funds to political groups that are trying to impeach the president and unseat Republicans across the nation.

Brock’s Media Matters for America is a registered 501(c)3 non-profit organization that has tax-exempt status. That tax-exempt status comes with an important caveat: the non-profit is barred from participating in political activity–funding or otherwise–that is in support or opposition to a candidate for office.

Both organizations have a history of engaging in political behavior, as TheDCNF exclusively reported in October. Brock’s organizations face a Federal Election Commission complaint detailing an alleged scheme to hide donor identities involving both the foundation and super PAC that allowed for the funneling of untraceable millions that can not be publicly traced to their donors toward initiatives against conservative and GOP causes around the nation.

Under the IRS code, all 501(c)3 non-profit organizations “are absolutely prohibited from directly or indirectly participating in, or intervening in, any political campaign on behalf of (or in opposition to) any candidate for elective public office.”

If Media Matters is using money it receives in charitable donations to fund political activities directly impacting a candidate for office, the Internal Revenue Service (IRS) would then have legal grounds for revoking the non-profits’ tax-exempt status.

Media Matters reports the 2016 grant to AB Super PAC on its financial statements but never explicitly states what the funds are going towards. The non-profit says the grant is for something entirely different in its IRS filings. 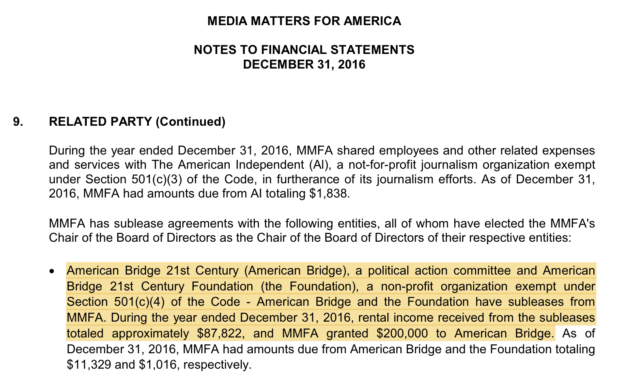 For its part, American Bridge 21st Century super PAC doesn’t report receiving $200,000 from Media Matters for America in 2016 in its IRS filings and the foundation hasn’t filed its Form 990, making it impossible at the current time to confirm the grant.

There is a contradiction in the reporting of the $200,000 amount in either Media Matters financial disclosures or with American Bridge super PAC.

David Brock and American Bridge did not respond to multiple requests for clarification about the reporting discrepancy of the grant.

American Bridge Super PAC is outwardly working on a campaign to impeach President Donald Trump and put progressives into elected office at all levels of government. If the $200,000 was granted to the super PAC and is not recognized in PAC’s filings, it calls into question what those funds were used towards (i.e. political activity for or against a candidate).

American Bridge 21st Century PAC is, simply put, a bastion of the Democratic Party and liberal organizations. It provides talking points, opposition research and rapid response to progressive candidates nationwide. Brock’s PAC places well over $300 million worth of its research in political advertisements and it has huge plans for the upcoming 2020 election cycle.

Brock personally laid out the PAC’s mission through the 2020 election cycle in the memo. The top initiatives include defeating Trump, “either through impeachment or at the ballot box,” and changing “the balance of power by measurably impacting US Senate, gubernatorial, and state legislative races.”

“American Bridge will make running as a Republican candidate in the next four years painful,” the memo reads. “We will not only damage Trump, but also the candidates who enable and support him.”

Regardless of the PAC’s stated goals, a 501(c) non-profit, like Media Matters, cannot give to political organizations for the purpose of defeating or electing a candidate. Doing that could cause them to lose tax-exempt status.

On the other hand, if the $200,000 grant Media Matters claims to have given to the foundation for “educational program(s),” is the correct reporting, then there is still a case to be made that Media Matters is giving money to outwardly political organizations. That would cause Media Matters to lose its tax-exempt status, if not a number of other Brock organizations.

A cursory glance at the foundation’s work shows it is producing politically motivated work in opposition to the president and Republicans’ across the nation.

Media Matters sells itself as the primary authority on what is correct and what is false in the media narrative and makes its mission to point that out to “offending media institutions.”

Media Matters posts rapid-response items as well as longer research and analytic reports documenting conservative misinformation throughout the media. Additionally, Media Matters works daily to notify activists, journalists, pundits, and the general public about instances of misinformation, providing them with the resources to rebut false claims and to take direct action against offending media institutions. – Media Matters for America’s website

Brock’s Political Network Is Extensive And Faces An FEC Complaint

Brock also draws a salary from all of the groups in his network, making him millions of dollars and one of the most powerful liberal political activists. Brock isn’t the only person getting wealthy from his political nexus–a few others are making millions along with him.

The Media Matters chief uses one of D.C.’s top Democratic fundraising firms to support nearly all facets of his network’s campaign to unseat Republican lawmakers, impeach the president and monitor conservative causes around the nation.

In late October, TheDCNF reported how Brock is making Mary Pat Bonner, a former aide and fundraiser for former Vice President Al Gore, millions of dollars a year in a system of interconnected contracts with Brock-affiliated groups.

Bonner heads an independent political consulting firm in Washington, D.C., that has annual contracts with a number of Brock’s organizations that pay her firm millions for fundraising services. In exchange for drumming up big donations, Bonner’s firm earns well into the seven figures.

Many of the groups in Brock’s network, including Media Matters and the various arms of American Bridge, are situated just over a mile from the White House and the U.S. Capitol, in two floors of an office building in Northwest D.C. These entities also have entered into cost-sharing agreements, which are at the center of the ongoing FEC complaint.

TheDCNF’s report on the FEC complaint isn’t the first time someone has called the way money moves around Brock’s political network into question.

Brock’s former domestic partner, William Grey, threatened the Media Matters head to expose “derogatory information about (Brock) and his organization to the press and donors that would be embarrassing to him and cause harm to the organization,” in a 2010 police report.  The threat ultimately led to an $850,000 payout for Grey, according to a 2012 Fox News report.