CNN made an egregious reporting error Friday on the potential connection between Donald Trump Jr. and Wikileaks.

The story, which was touted by the network for many hours on broadcast and social media as a bombshell turned out to be factually incorrect and insignificant. CNN’s original report definitively stated that Don Jr. received access to secret Wikileaks information via email on Sept. 4, 2016. In fact, that email was sent on Sept. 14, after the said documents were released to the public.

CNN pushed the fake story for hours, even after the email in question was made publicly available to disprove the reporting. In a humiliating move, CNN decided to have one of the authors of the debunked story go on air to “correct” his reporting.

Manu Raju went on and said his reporting was “incorrect” and is “not as significant as what we know now based on this e-mail.” Neither CNN or the reporter apologized for the error. His comments in full:

We are correcting a story we have been reporting throughout the day about an email that was sent to candidate Trump, Donald Trump Jr. and others during the campaign.

This email included a decryption key and also a link to where they could access some of these hacked Wikileaks documents from the Democrat National Committee.

We have been reporting that this email came on September 4th, that was before some of these documents were publicly available. But we have just obtained a copy of this email. This e-mail was on September 14th. So that is ten days later than what we originally reported earlier today. And this appears to change the understanding of this story because initially it seemed perhaps they were being offered access to documents that were not yet publicly available, but in this e-mail from an individual named Michael Erickson, they do direct the Trump campaign so some publicly available documents, hacked documents from Wikileaks as well as from the former secretary of state Colin Powell, saying that those documents are, indeed, available.

Now our initial reporting on that September 4th date was based on two sources who had seen this e-mail but that information was incorrect now based on a copy of the e-mail that we have obtained this afternoon.

So, Brooke, it just shows that perhaps the initial understanding of what this e-mail was perhaps is not as significant as what we know now based on this e-mail. We do know that Donald Trump Jr., when he testified before the House Intelligence Committee, was asked about this e-mail. He said he had no knowledge of it, which we reported as well. And his attorney said he did not act on the offer to obtain these hacked e-mails.

In print, CNN updated the story as such: 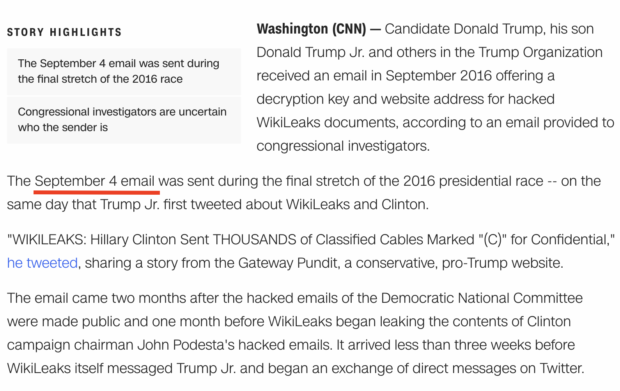 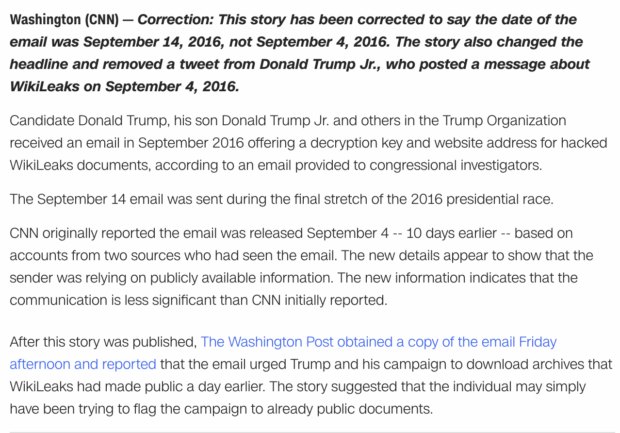 At this time, CNN is taking no disciplinary actions against the reporters who published fake news.