CNN has yet to offer a full explanation for how it butchered a story alleging that the Trump campaign was provided a preview of documents stolen from the DNC during the presidential campaign.

The network, which bills itself as “the most trusted name in news,” says its journalists, Manu Raju and Jeremy Herb, went through the proper editorial process and therefore won’t be disciplined. CNN also claimed that the sources for the story did not intend to deceive. By providing that cover, CNN avoids having to identify its anonymous sources.

But a review of CNN’s reporting on the story raises questions about both of those defenses. And neither Raju nor the network want to talk about it. Raju declined comment, and referred questions to CNN spokeswoman Lauren Pratapas. Pratapas did not respond to a request for comment. (RELATED: CNN Botches Major ‘Bombshell’ Alleging Connections Between Trump Email Contacts)

To recap what happened: Raju reported early Friday morning that Donald Trump Jr. had turned over to investigators with the House Intelligence Committee an email from a man named Mike Erickson which provided a link to a batch of DNC documents along with a decryption key. Erickson also mentioned documents that had been stolen from former Sec. of State Colin Powell.

Raju reported that the email was sent on Sept. 4, 2016. That date was significant because it was 10 days before a Russia front group called DC Leaks released stolen Powell emails.

If Erickson had indeed provided the hacked documents to Trumpworld in advance of their public release, CNN would have uncovered the first evidence that the Trump campaign was aware of Russian hacking prior to it being made public.

The Washington Post first reported that the email from Erickson was dated Sept. 14, 2016 and not Sept. 4, 2016. The Daily Caller obtained and published a copy of the email soon after.

It turned out that the day before Erickson’s email, Wikileaks had teased the release of a batch of DNC documents on Twitter. In its tweet, the group also provided a decryption key. Also on Sept. 13, 2016, DC Leaks published Powell’s stolen emails. (RELATED: 7 Times CNN Botched The News In 2017)

CNN corrected the story on air nearly two hours after The Post first reported on the email. And though the correction was so significant as to make the initial story worthless, CNN has refused to retract the report.

The network has refused to provide transparency into the journalistic breakdown. Its PR shop issued a statement announcing the correction on Friday. Network flacks provided statements to its own Oliver Darcy, a CNN reporter who covers the media beat. (RELATED: CNN Turns Its Screwup Into An Attack On Trump)

Brian Stelter, the host of CNN’s Sunday media show, “Reliable Sources,” provided more details about CNN’s thinking about the false report. Stelter reiterated that it was not believed that Raju’s sources intentionally misled him and that the sources for the story have been reliable in the past.

But while CNN is keen to move on from the scandal — which Stelter admitted has given his network a “black eye” — numerous questions remain unanswered.

Raju’s reporting strongly suggests that his source works on the Democratic side of the House Intelligence Committee. In his reports, he referred to Congress’ handling of the Trump Jr. emails and also cited comments that the real estate executive made during an interview he gave to the panel on Wednesday.

CNN anchor Jake Tapper had an opportunity on Sunday to probe the top Democrat on that panel about the email leak. But during his interview of California Rep. Adam Schiff, Tapper avoided the flawed report altogether. The spokesman for committee Democrats did not respond to TheDC’s requests for comment.

Raju’s reporting also indicated that he did not see the Erickson email. But he and CNN have not addressed what information he was actually provided by his “multiple sources.”

Raju reported Erickson’s name but appears not to have been told about other information contained in the email that would have shed more light on who he was.

Raju reported that “investigators are not certain who this individual is and we were not able to make contact with this person.”

In another segment, Raju reported that “we tried to find a Mike Erickson. We were not able to identify this person. Congressional investigators don’t know who the person is.”

But the actual email undercuts that reporting since Erickson is easily identifiable in the email. The copy provided to The Daily Caller shows that Erickson’s email address is clearly listed. Erickson’s positions with two aviation companies are also listed at the bottom of the email. 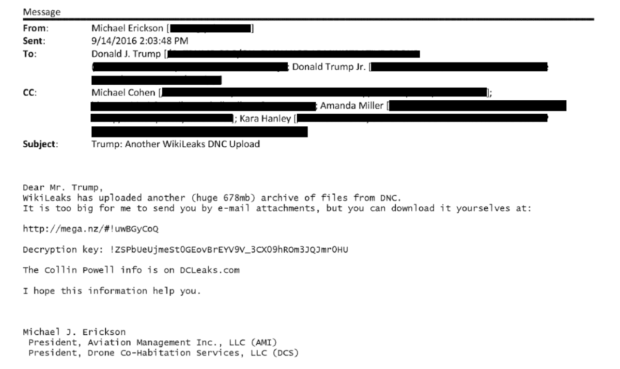 A simple Google search returned a phone number and address for Erickson. He did not respond to emails or multiple phone calls from The Daily Caller.

CNN has yet to say whether its reporters also attempted to contact Erickson prior to publishing the story.

Among the questions posed to CNN (which its spokeswoman did not respond to):

1.) What was Raju told about the Erickson email? Was he provided Erickson’s email address and the name of the companies he worked for?

2.) Did Raju attempt to contact Erickson? If so, how?

3.) Did Raju’s sources tell him that they could not figure out who Erickson was? If that’s what Raju was told, then his sources were either lying or not fully informed about the email.

5.) Did Raju ask his sources whether they had seen the email? What did they say?

6.) Will Raju’s sources be used in the future? Will CNN allow its reporters to write stories based upon readouts of emails that they have not seen?

7.) Did Raju figure out the significance of the Sept. 4 date himself, or was he clued into that significance by his sources?

Writing at The Federalist, Mollie Hemingway posed a series of 18 questions that CNN should answer about the scandal. As of Sunday night, the network had not responded to that list either.