The NBC ratings for NFL “Sunday Night Football” dropped 30 percent from a year ago, according to The Hollywood Reporter Monday.

The showdown in Pittsburgh between the Steelers and the Baltimore Ravens was quite a game with the home team kicking a last-minute field goal to win 39-38 Sunday night. (RELATED: NFL Ratings Tank–Worst Viewership In Nearly Two Decades) 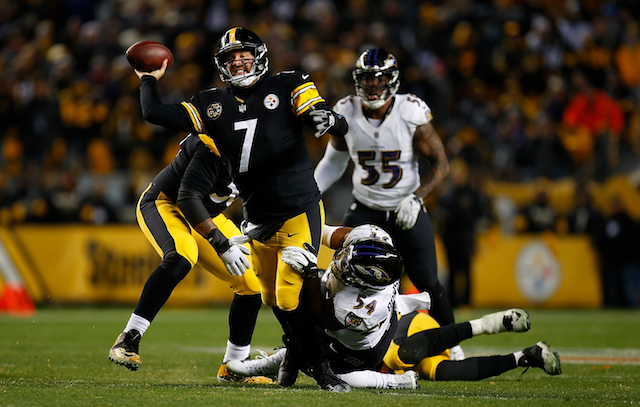 Ben Roethlisberger #7 of the Pittsburgh Steelers attempts a throw under pressure from Tyus Bowser #54 of the Baltimore Ravens in the fourth quarter during the game at Heinz Field on December 10, 2017 in Pittsburgh, Pennsylvania. (Photo by Justin K. Aller/Getty Images)

Despite that fact, the ratings dropped to the lowest numbers the network has seen in three weeks on “SNF.” The game scored an 11.6/19 in metered market households, which was down by 11 percent from the week prior. In early numbers, the game averaged a 4.9 rating among adults ages 18-49 with 15.9 million viewers.

Looking back to the game a year ago at the same time, the battle between the Dallas Cowboys and the New York Giants earned a 16.5 in metered market households.

In comparison, last week’s matchup between the Philadelphia Eagles and the Seattle Seahawks scored a 13.1/22 in metered market numbers, an increase of seven percent from the week before. That NFC battle was also up by 14 percent in metered market results from last year’s game at the same time with a 6.1/19 rating in the key demographic and 17.75 million viewers.