The Daily Caller released a funny video Tuesday of FCC Chairman Ajit Pai defending the commission’s upcoming net neutrality rollback. Through Wednesday and Thursday, liberals and others who dislike Pai’s political position lost their minds. And by Friday morning, Google, one of the most powerful companies on the planet, had censored the video based on a bogus claim from a politically motivated man.

It took seven crucial hours and the full force of our news site to push Google and YouTube to reverse this political censorship. We were able to prevail because of the sizable contacts and resources of TheDC. An average citizen showcasing a political viewpoint Google and the left disagreed with would almost certainly have had a far more difficult — and fruitless — time fighting back.

At TheDC, we knew that releasing a video of Pai fidget-spinning in a Santa suit, swinging lightsabers and playing with a puppy a day before the FCC’s net neutrality vote would ruffle some feathers. We were prepared for the hyperventilating over the video to reach a fever pitch as the Obama-era internet regulations were rolled back Thursday afternoon. Indeed, the video was viewed millions of times over a 24-hour period, was featured in a broad spectrum of news mediums, and spawned an avalanche of memes on Reddit.

In producing the video, we never advocated for Pai or the new net neutrality regulations, and you should check out our in-depth interview with him here on race and the internet. The video was meant to tell Pai’s version of the net neutrality battle in a non-traditional, non-linear way.

Any honest viewer of this video would see that.

Unfortunately, the seething outrage over the net neutrality issue poisoned the well far beyond critics’ ability to appreciate parody. The video, and those featured in it, were viciously attacked. The “likes” to “dislikes” were comically ratioed, 5,000 to 144,000 at last count. 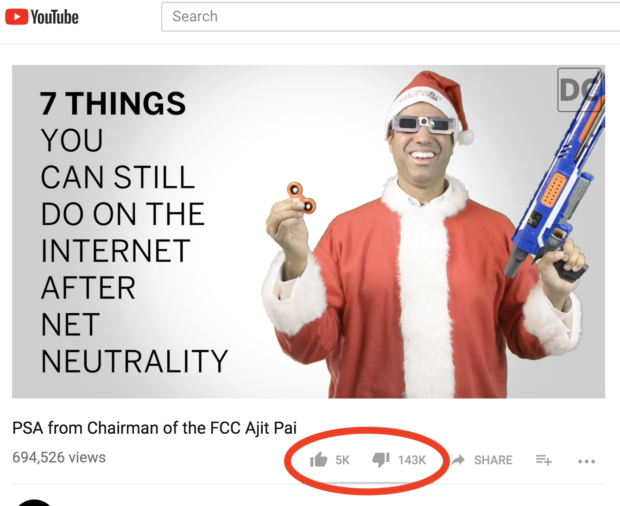 Then, as the left often does with content that offends them, they started a campaign to strip the video from the internet.

That happened to us, without warning, on YouTube Friday morning.

Our Pai video was removed because of a copyright claim for … wait for it … “The Harlem Shake.” 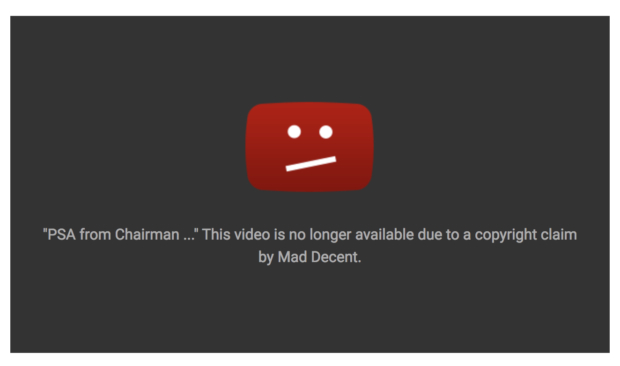 “The Harlem Shake” is an embarrassingly outdated internet trope that peaked in popularity approximately four years ago. Like much of the content in the video, it was there to make a point in a funny way. A simple search on Youtube shows over 7,000,000 videos using long segments of the song with billions upon billions of total views. Our video used only a few seconds of the song and was not monetized — we were not making profit from this silly rendition of the FCC chairman dancing to a few seconds of a song uploaded to the internet multi-millions of times.

Because it featured a Republican against net neutrality, however, the triggering began.

The song is owned and licensed by record label Mad Decent, who demanded the platform remove the video, not because anyone was making profit off their work, but because they openly disagreed with the political worldview of the man dancing to it.

Baauer, the DJ who created the song, openly admitted on Twitter that he was targeting our video because he doesn’t like its political message. He called Pai a “loser” and said “I support net neutrality like the vast majority of this country and am appalled to be associated with its repeal in anyway (SIC).” His sudden concern for copyright law is even more laughable, considering he created “Harlem Shake” by sampling another artist’s vocals without permission, which is itself a fair use.

YouTube, a Google-owned company who supports net neutrality, willingly complied with Mad Decent’s request. This is not in any way standard practice for the platform, which thrives because its creators liberally flex fair-use content.

Fair use, defined by Stanford Law, is the use of copyright material “to comment upon, criticize, or parody a copyrighted work.”

Fair use is any copying of copyrighted material done for a limited and “transformative” purpose, such as to comment upon, criticize, or parody a copyrighted work. Such uses can be done without permission from the copyright owner. In other words, fair use is a defense against a claim of copyright infringement. If your use qualifies as a fair use, then it would not be considered an infringement.

The FCC chairman dancing with a lightsaber to “The Harlem Shake” is an obvious parody. What’s more, the entire video and the very short clip of the song were there as a commentary on the whole network-neutrality debate. This is as open-and-shut a case of fair use as has ever existed.

As soon as we discovered that The Daily Caller’s video had been removed, our chief operations officer reached out to Google for answers. The video was restored after approximately seven important hours down.

Getting Google to treat content fairly shouldn’t require being a company with the size and influence of The Daily Caller.

The network-neutrality debate over whether the large internet providers will discriminate based on their commercial or political interests is raging in America. It’s a good debate to have.

While we are debating, however, Google is quietly and arbitrarily using its massive power to censor the internet.

YouTube’s targeting of Daily Caller content and its willingness to remove our video for political purposes while millions of other uses are allowed to remain on the platform should stand as a terrifying prospect for every American.

It follows a disturbing trend of platforms and networks devaluing and restricting content based on political viewpoints.

This is an important moment, for us and for all publishers who supposedly value “neutrality” on the internet.

Watch our “Newsmakers” interview with Pai: