The number of arrests along the Southwest border has climbed back up to Obama-era levels in the first two months of the new fiscal year, suggesting President Donald Trump’s effect on illegal immigration has worn off after early progress.

Just under 40,000 people were either arrested trying to illegally cross the border or were turned away at ports of entry in November, about 12 percent more than in October, according to Customs and Border Protection (CBP) data released Friday.

The combined total of arrests and inadmissible migrants in November was lower than the same month of the last two fiscal years, but exceeded the totals in FY2013, 2014 and 2015. 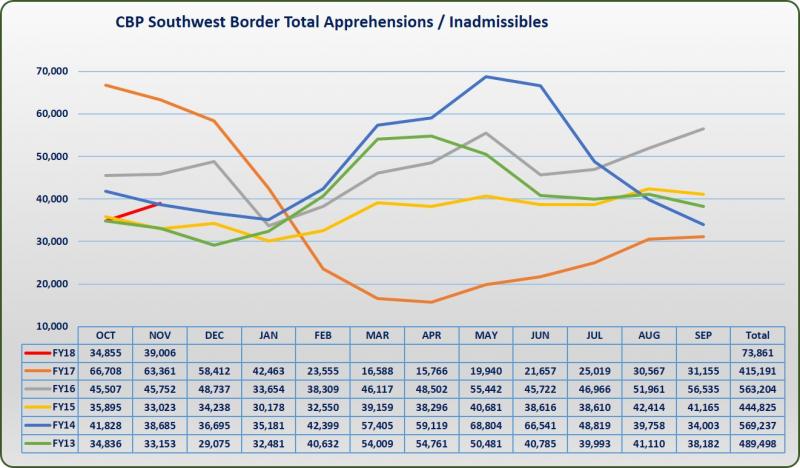 Border arrests are used as a proxy for overall levels of illegal immigration. The idea is that, assuming a given standard of border security, more apprehensions mean that more illegal aliens are slipping undetected into the U.S., and vice versa.

CBP officials referred to November’s arrest total as an “uptick,” but it was a continuation of a trend that has continued since illegal border crossings fell to a recent low in April. Since then, border arrests have climbed every month.

More worrisome for border officials is the rising tide of unaccompanied children and family units attempting to cross the border. The number of family units arrested along the southwest border spiked 45 percent from October to November, while apprehensions of unaccompanied minors jumped 26 percent month-to-month.

The cases are particularly troublesome because they have special detention requirements and, in the case of family units, often result in complex and costly asylum claims.

OPINION
1
UFC Superstar Stops Rioters In Awesome Video
Editorial
2
1 Person Reportedly Dies After National Guard, Police Return Fire On Crowd
US
3
Here Are The Possible Reasons Mike Flynn's Judge Hired His Own Attorney
Politics
4
STONE: Now That I'm Ungagged, I'd Like To Say A Few Things About My Prosecution
Opinion
5
Police Chief Says Protesters Tried To Block Firefighters From Saving Child In Building They Set On Fire
US