CNN political commentator Hilary Rosen accused a Georgetown student of anti-semitism and bigotry because he wore a bacon-themed onesie to a basketball game.

The Georgetown Hoyas basketball team played the Syracuse Orange at Verizon Center on Saturday, and Rosen was apparently on the lookout for anything she could deem offensive.

“Look at the guy in the ‘bacon suit,'” Rosen tweeted with a photo of the Georgetown student section. “This is a Georgetown #Hoyas fans anti-Semitic smear to the Syracuse team.” 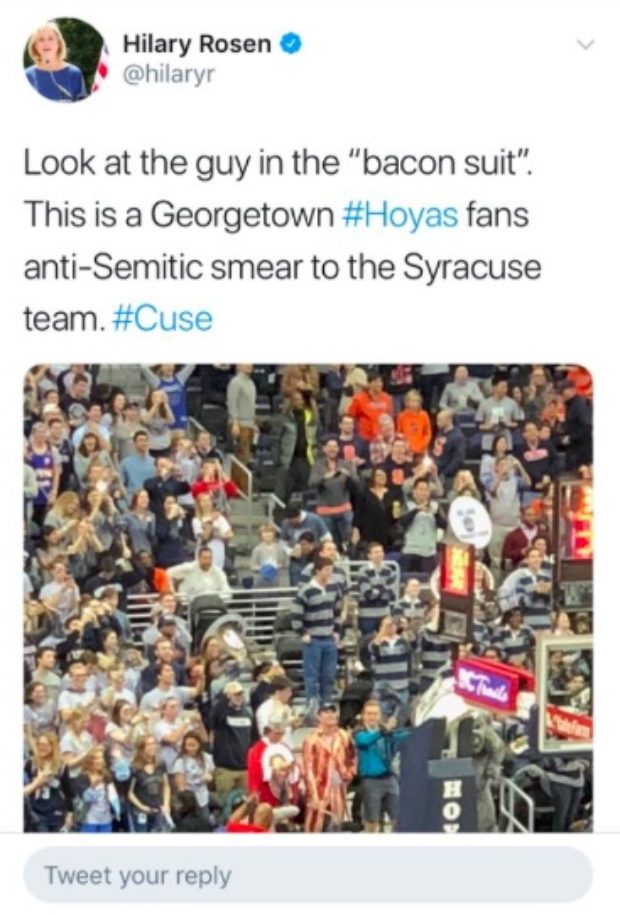 Rosen even doubled down on her tweet when the game ended with a Syracuse win, asserting that “bigots lose.” 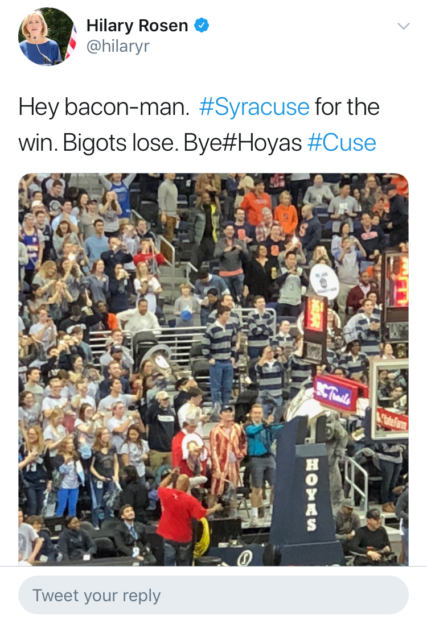 The student in the suit, junior Michael Bakan, told The Daily Caller he was shocked when friends started sending him screenshots of the tweet. He explained that the suit was a joke about his last name, which is pronounced “bacon.”

“At first I thought it was a joke,” Bakan said of Rosen’s accusation. “The real way [my last name] is pronounced is bacon, and that was the impetus behind the costume. I’ve worn it to three games now.”

Bakan said he hasn’t had issues wearing the suit in the past and would like to see the record set straight.

“I think one of the reasons I’ve enjoyed Georgetown basketball games is it’s…a time when I can express myself and have a little fun with my friends during an oftentimes stressful college environment,” he explained. “To see some of that being interpreted differently is not the best feeling.”

Rosen finally deleted the tweets but only after over a hundred people called her out for her baseless accusation of anti-semitism.

“I’ve seen the number of followers [Rosen] has, the platform, so it was a bit disheartening,” Bakan said.