Journalists in Myanmar are coalescing by wearing black clothing Saturday, a showing of solidarity after two Reuters reporters were essentially abducted by government officials.

Known as the “Black Campaign,” the contingency of journalists called the Protection Committee for Myanmar Journalists are trying to add extra attention to the “unfair arrests that affect media freedom,” according to Reuters. 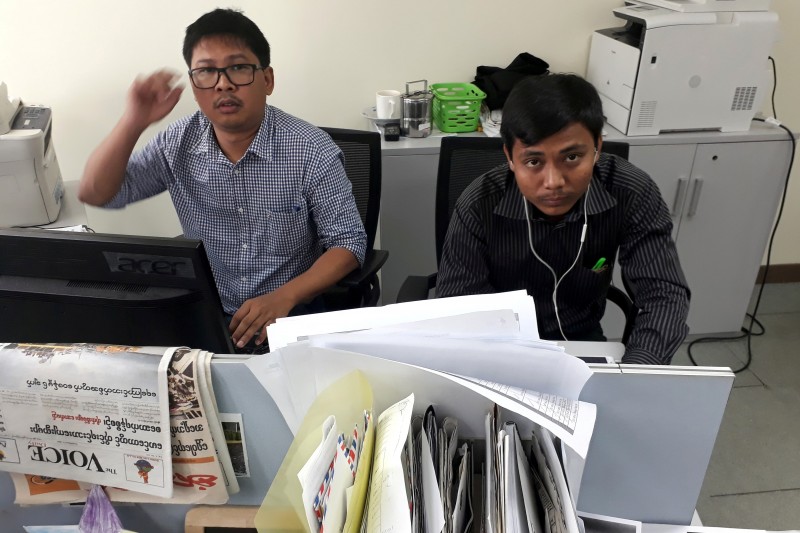 “Journalists all over the country are urged to take part in the Black Campaign,” the group reportedly said, adding that coordinated protests and prayers are also planned.

The official committee was created after a newspaper editor in Myanmar was arrested for a cartoon that depicted the military in a humorous, perhaps mocking, way. They believe the country is currently experiencing “the dark age of media freedom,” reports Reuters.

Myanmar public officials say that the arrests were made due to a violation of the country’s Official Secrets Act, implying a purported divulgence of classified information.

“Journalists should be able to tell what is secret and what is not,” Myo Nyunt, deputy director for Myanmar’s Ministry of Information, told Reuters. “We already have press freedom. There’s freedom to write and speak … There’s press freedom if you follow the rules.”

The two arrested Reuters journalists were detained Tuesday after weeks and months of reporting on a crisis in the country in which roughly 655,000 Rohingya Muslims have been forced to flee. The mass exodus mainly stems from a military crackdown on militants in the southeast Asian nation, including reports of ethnic cleansing. (RELATED: US Gives $32 Million To Help Ethnic Cleansing Victims In Myanmar)

The committee refutes the government’s claim that it broke any rules, and rather thinks its an act of silencing. They are demanding the immediate release of Wa Lone, 31, and Kyaw Soe Oo, 27. (RELATED: Mother Says Her Son Was Detained For Online Dissent Against Gov’t)

Public relations executives at Reuters did not respond to The Daily Caller News Foundation’s request for further details by time of publication.