A former employee alleged in a story published Sunday that Women’s March co-founder Linda Sarsour covered up and dismissed complaints of graphic sexual assault. Now New York Democratic state Rep. Dov Hikind is calling for an investigation into the charges.

Sarsour is accused of enabling the alleged sexual assault and harassment of a woman who worked for her, Asmi Fathelbab, according to the victim and two sources directly familiar with the matter.

The assault took place at the Arab American Association while Sarsour served as executive director. Fathelbab told The Daily Caller that instead of properly dealing with the complaints, Sarsour dismissed them because Fathelbab “was not attractive enough to be harassed” and the accused was a “good Muslim” who was “always at the Mosque.”

Hikind, a Democrat from Brooklyn who has served since 1983, is calling for an investigation into the prominent activist.

“If Linda Sarsour enabled the sexual assault & harassment of a woman who worked for her, as alleged, this should concern everyone,” he said in a statement Monday. “Women everywhere should be demanding an investigation into these charges.” 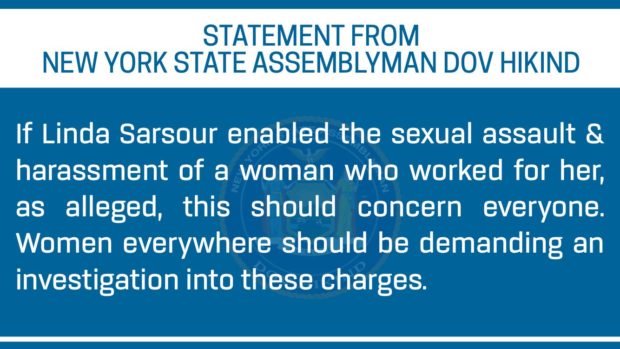 In a tweet, Hikind said the issue was bipartisan and that people across the “political spectrum should seek the truth about charges.”

People on all ends of the political spectrum should seek the truth about charges against @lsarsour pic.twitter.com/g98v940pWg

Fathelbab recalled how her harasser, named Majed Seif, would grope and rub up against her while she was working:

“He would sneak up on me during times when no one was around, he would touch me, you could hear me scream at the top of my lungs,” Fathelbab told TheDC. “He would pin me against the wall and rub his crotch on me.”

Fathelbab claims one of Majed’s alleged favorite past times was sneaking up on her with a full erection.

“It was disgusting,” she told The Caller. “I ran the youth program in the building and with that comes bending down and talking to small children. You have no idea what it was like to stand up and feel that behind you. I couldn’t scream because I didn’t want to scare the child in front of me. It left me shaking.”

Neither the Women’s March, Sarsour or Seif have returned the Daily Caller’s request for comment.