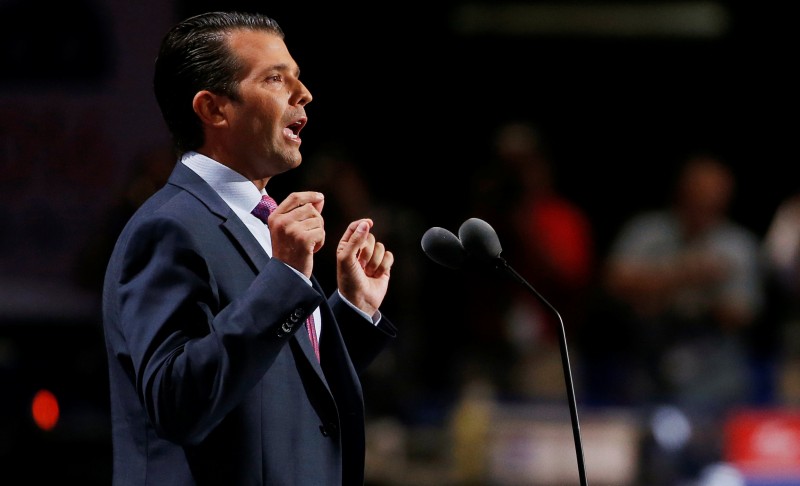 “Probably not the best look,” Trump Jr. added. “So much for freestyle. #WillTheRealLoserPleaseStandUp.”

The last part was a reference to Eminem’s song “Real Slim Shady.” In the lyrics to the song, the rapper repeats the line, “Will the real Slim Shady please stand up?”

It’s a bit odd that he’s admitting to having prepared heavily to take on a 70 year old politician. Probably not the best look. So much for freestyle. #WillTheRealLoserPleaseStandUp https://t.co/suToF4D193

In the Vulture interview, the rapper — whose real name is Marshall Mathers III — admitted that he wants Trump to “answer him” because he has “all kinds of sh*t to say back to him if he does.”

“I get almost flustered thinking about him–that’s how angry he makes me. He’s got people brainwashed,” Eminem explained. “I just feel mad that Trump’s sold people a dream that’s never coming true. I want the division in this country to stop. And like I said, I most want people to take a second and think about what I’m saying.”

“It’s not so much about him hearing something I have to say, because there’s nothing I’m saying about him on ‘Revival’ that he doesn’t already know about himself,” he added. “It’s more that I want him to answer me, because I got ideas for all kinds of shit to say back to him if he does.”

When asked if he was worried about losing fans due to his political stance, the rapper shared that he wasn’t.

“I’m not worried about whether people like what I say politically,” Eminem shared. “I just want to know they’re listening. As long as I have people’s ears, I have to say what I think is right.”