Bloomberg Says Chinese People ‘Don’t Seem To Want’ Democracy: ‘They Like Their System’

An MSNBC anchor is extremely mad that her staff is getting a tax break and bonuses after Congress passed comprehensive tax reform.

On Wednesday, the GOP passed historic tax cuts. The tax cuts will give 80 percent of Americans a tax break and cut the corporate tax rate nearly in half.

One of the unexpected consequences after yesterday’s tax cuts was a series of statements from American corporations, announcing a mix of higher wages for their employees, higher charitable giving and thousand-dollar Christmas bonuses for their workforce.

Hundreds of thousands of employees at six corporations across the country will be getting either an immediate raise or an immediate bonus due to the tax bill.

One of the worst reactions to these announcements came from MSNBC anchor Joy Reid. Reid had regularly used her platform to spread misinformation about the bill itself and how it would impact Americans. As the bonuses began to be announced, Reid sent out a tweet, saying the corporations were just giving out bonuses for their own benefit. 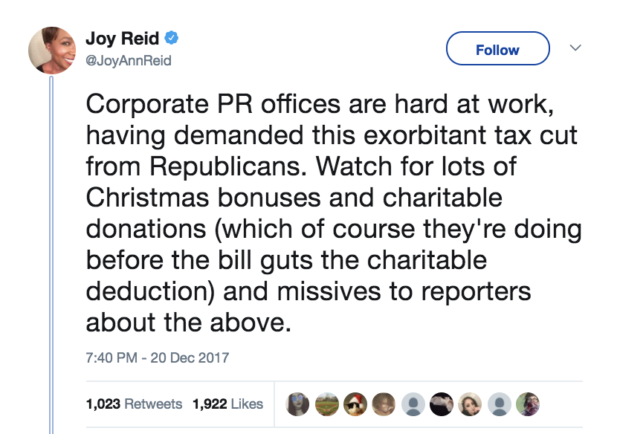 Interestingly, it’s members of Reid’s staff who stand to benefit the most. Her parent company,  Comcast/NBCUniversal, announced that hundreds of thousands of employees would be getting $1,000 bonuses, and that they would be investing $50 billion in the company over the next five years.

According to the press release on the matter:

Based on the passage of tax reform and the FCC’s action on broadband, Brian L. Roberts, Chairman and CEO of Comcast NBCUniversal, announced that the Company would award special $1,000 bonuses to more than one hundred thousand eligible frontline and non-executive employees. Roberts also announced that the Company expects to spend well in excess of $50 billion over the next five years investing in infrastructure to radically improve and extend our broadband plant and capacity, and our television, film and theme park offerings. With these investments, we expect to add thousands of new direct and indirect jobs.

Many asked the same question: Why would the MSNBC anchor rail against raises for her own staff?