We’re only a few days away from the start of the major college football bowl games, and the Associated Press’ Top 25 account on Twitter still has me blocked.

The AP’s Top 25 account blocked me without any explanation of any kind at all. I’m assuming it’s because my takes are just too woke because there’s probably not any other realistic reason. It’s either that or they honestly think I’m coming for the throne, which is maybe more realistic than I’m giving myself credit for. 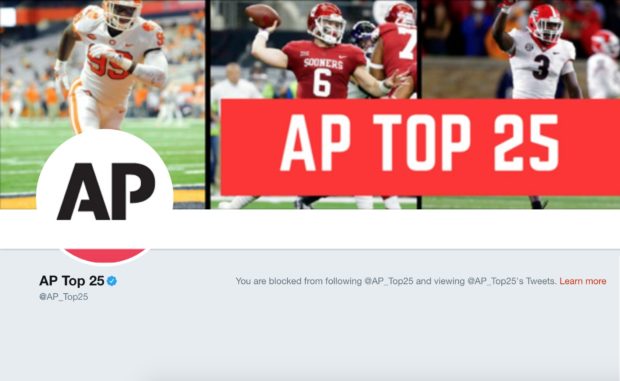 I thought that maybe they’d just eventually realize the error of their ways, and unblock me before we got to the games that mattered. Looks like that’s no longer an option. We’re at the 11th hour here, and it’s time to make moves.

This is just such a mind-boggling move to me. I guess I should be flattered. One of the most powerful organizations on the planet saw me as such a threat that they blocked me on Twitter. I guess that means we’re headed in the right direction.

If the AP bends the knee then maybe I will show mercy. Otherwise, it really looks like we’re on a collision course.