The NFL announced Tuesday that the final “Sunday Night Football” game of the season has been canceled, according to CNN.

The league had yet to announce who would play during the primetime game next Sunday, but with the chance that none of the matchups would have playoff implications for one or both of the teams, they opted not to schedule the game. (RELATED: ‘Sunday Night Football’ Ratings Jump Up From Last Week’s) 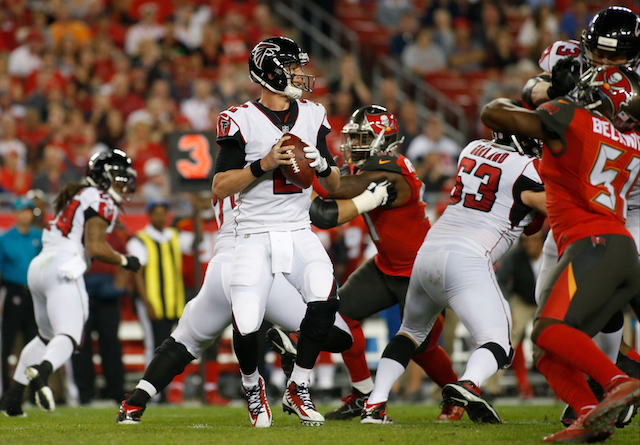 TAMPA, FL – DECEMBER 18: Quarterback Matt Ryan #2 of the Atlanta Falcons looks for a receiver during the first quarter of an NFL football game against the Tampa Bay Buccaneers on December 18, 2017 at Raymond James Stadium in Tampa, Florida. (Photo by Brian Blanco/Getty Images)

The other problem the league faced was broadcasting a game on New Year’s Eve, which would invite lower number of viewers traditionally on that night.

Instead, fans can settle in for seven games at kick-off at 1 p.m. eastern Sunday and a total of 9 games starting at 4:25 p.m. eastern time.

“We felt that both from a competitive standpoint and from a fan perspective, the most fair thing to do is to schedule all Week 17 games in either the 1 p.m. or 4:25 p.m. windows,” NFL broadcast chief Howard Katz said in a statement.

The last time a “Sunday Night Football” game took place on the final night of the year was in 2006 when the Chicago Bears hosted the Green Bay Packers. That game was Hall of Fame member Brett Favre’s final game with the Packers. Despite that fact, the game only drew 13.4 million viewers, which for that season was a quarter of the typical audience for “SNF.”

In a season plagued with lower ratings due to the national anthem protests, the league’s decision was not surprising.