Sarah Sanders took the White House podium for the first time in 2018 on Tuesday and there was plenty of news to talk about.

First on the list: the protests in Iran. In her remarks, Sanders wasted no time criticizing the Iranian regime. When asked what is President Trump’s “end game” in Iran, Sanders said she thinks “the people of Iran are actually given basic human rights, and [Trump] would certainly like to see them stop being a state sponsor of terror.”

She added, “I think that’s what the whole world would like to see.”

The White House press secretary was then asked if Trump’s support of the protesters may cause a “backlash against them by the Iranian government.”

Secretary Sanders took a direct shot at the legacy of President Obama in her response, saying:

“No, I think one of the big things that even Hillary Clinton outlined in this when she said that the Obama Administration was to restrained in the 2009 protest and said that that won’t happen again. For once, she is right and we agree with her because President Trump is not going to sit by silently like President Obama did. He certainly supports the Iranian people and wants to make that clear.”

Sanders was referring to the Green Revolution of 2009, where thousands of protesters in Iran took to the streets to contest the reelection of president Mahmoud Ahmadinejad. The protesters reached out to the Obama State Department for support but were met with silence.  The Green Revolution was ultimately put down viciously with many deaths and arrests.

President Trump tweeted Tuesday morning, “All of the money that President Obama so foolishly gave them went into terrorism and into their “pockets.” The people have little food, big inflation and no human rights. The U.S. is watching!” 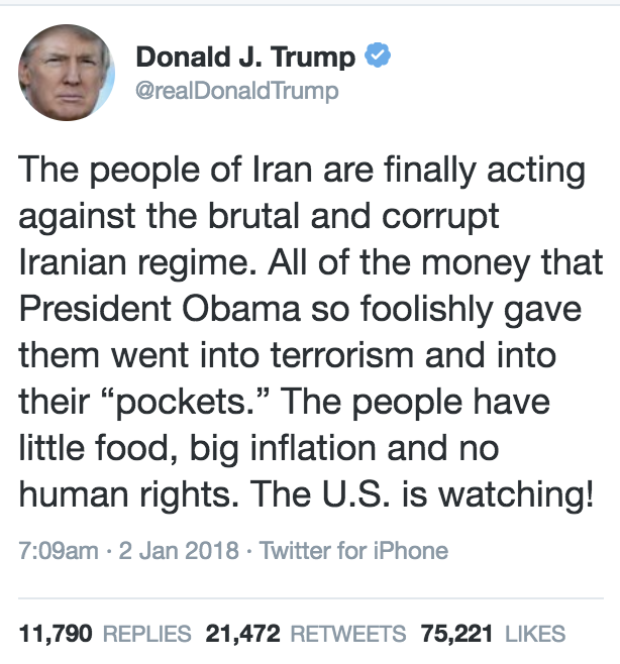