Bannon claimed that the President and his allies engaged in “treasonous” and “unpatriotic” behavior, claims that make it seem like he’s also burning bridges with his very own readers.

Breitbart reported Trump’s rebuttal to Bannon’s comments, but it appears as though Breitbart readers are sticking behind Trump. 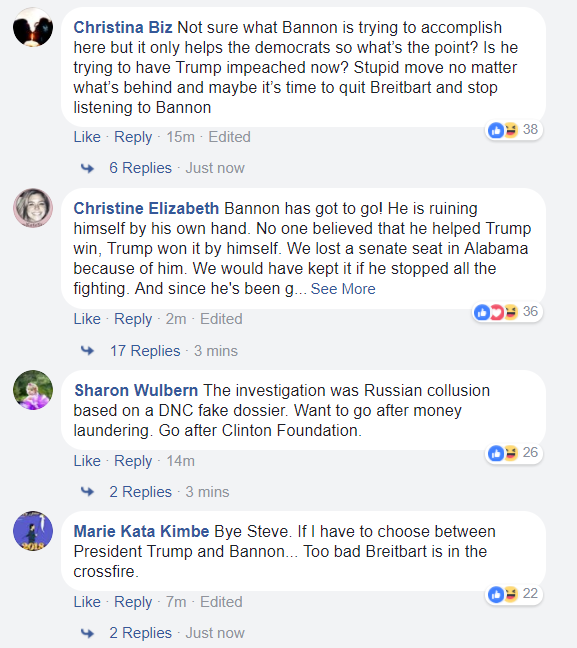 “Not sure what Bannon is trying to accomplish here but it only helps the democrats so what’s the point?” the top commenter opined.

Donald Trump Jr., the primary target of Bannon’s quotes, noticed the disconnect himself.

Wow, Just looked at the comments section on Breitbart. Wow. When Bannon has lost Breitbart, he’s left with . . . umm, nothing.

The disconnect between Breitbart readers and Bannon on Trump’s alleged collusion with Russia makes sense, as Breitbart itself has called the scandal a “Russian conspiracy.”

On the other hand, Bannon doesn’t even consider Breitbart — his own publication — to be a reputable outlet.

“[The information from the meeting could be] dumped down to Breitbart or something like that, or maybe some other more legitimate publication,” Bannon told Wolff in excerpts released to the press Wednesday.