Liberals fell for a parody excerpt of Michael Wolff’s “Fire and Fury” book that claimed Trump was angry he couldn’t find “The Gorilla Channel” on the White House cable package.

Pixelated Boat, a comedy Twitter account with over 100k followers, wrote a hilarious parody of Wolff’s book on Friday. The fake passage said Trump thought the TV in his bedroom was broken because it didn’t have “the gorilla channel,” so aides strung together a number of gorilla documentaries and broadcast it as a fake cable channel for the president.

Wow, this extract from Wolff’s book is a shocking insight into Trump’s mind: pic.twitter.com/1ZecclggSa

— the gorilla channel thing is a joke (@pixelatedboat) January 5, 2018

Despite the passage being obviously fake — especially when it claims that Trump watches “the gorilla channel” for up to 17 hours a day — a decent number of verified liberals fell for the joke.

Scott Dworkin, a Democratic strategist, tweeted, “Trump was mad cuz his tv wasn’t getting ‘the gorilla channel ‘– doesn’t exist. So staff made videos of gorillas for him.”

Samantha Maiden, a Sky News journalist, also tweeted the passage as if it were real, even creating a Trump-gorilla meme to go along with it. Followers informed her that it was just a joke, and she claimed she didn’t realize at first because she’s on vacation. 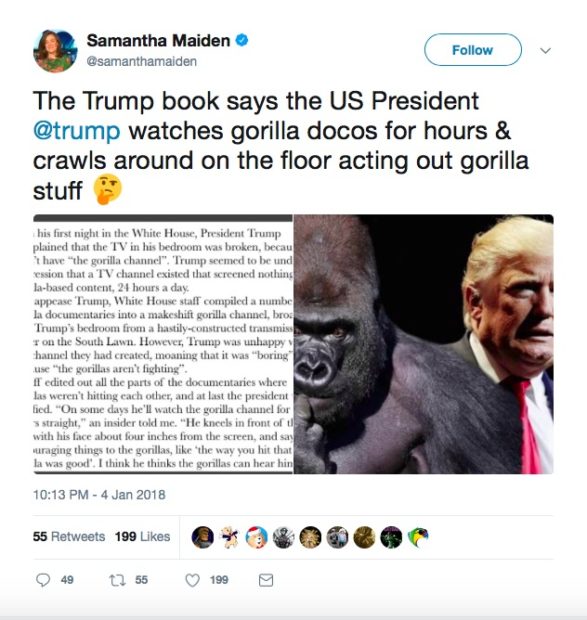 Podcaster Toure proudly stated that he didn’t believe the “Gorilla channel story” from Wolff’s book. In a follow-up tweet, he thanked his followers for telling him it was a parody.

“I’m… troubled by things like the ‘gorilla channel’ tale which rings false to me,” actor Don Cheadle similarly wrote. “Like someone told wolff the story just to see if he’d print it.”

Of course, Cheadle didn’t realize that Wolff never printed anything about the gorilla channel. 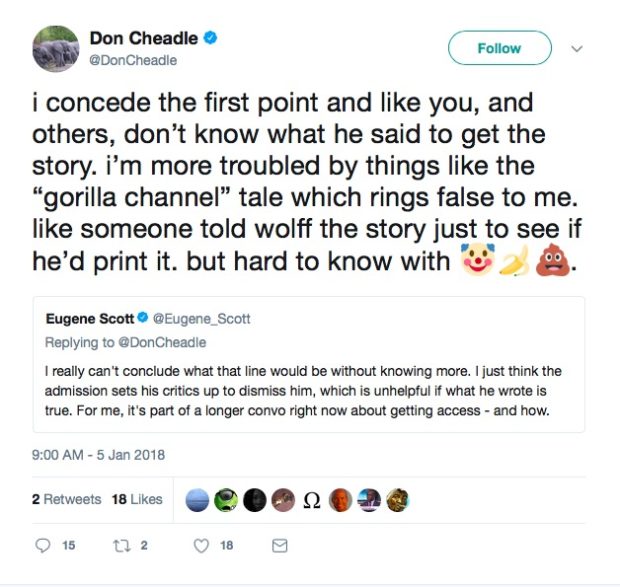 King’s College London Professor Christine Cheng admitted she thought the gorilla channel was real because “Trump is beyond parody.” 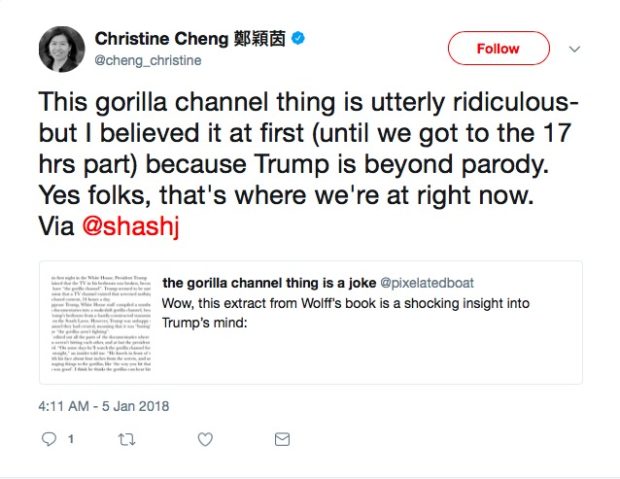 Beyond parody herself is Litsa Dremousis, an author whose work sometimes appears in New York Magazine and The Washington Post. Dremousis thought that the gorilla channel story was good justification for impeachment.

“It’s not that I think the gorilla portion of Michael Wolf’s book will keep me up tonight; I think it might keep me up *forever* #Impeach,” she wrote. 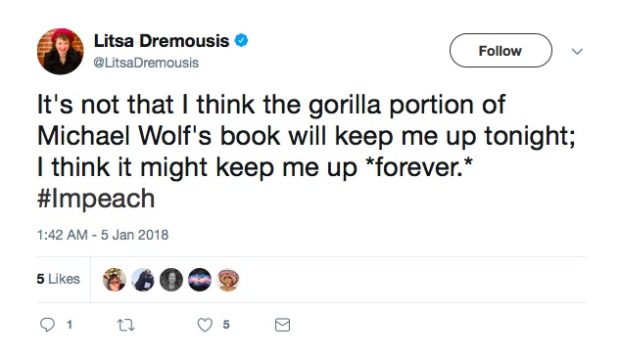 Pixelated Boat eventually changed his Twitter name to “the gorilla channel thing is a joke” to try and warn people who were falling for the joke.