Officials in California, who are suing Exxon Mobil for contributing to global warming, soft-peddled the effect global warming has on their communities when they were selling municipal bonds, according to court documents filed Monday.

Local California officials are suing the giant oil producer to cover the costs associated with projects meant to fortify low-lying areas. Exxon is now highlighting past bond disclosures showing officials argued they could not predict when sea levels would rise.

The cities of Oakland, San Francisco, Santa Cruz and Imperial Beach are also plaintiffs as are Santa Cruz County, San Mateo County, and Marin County are among a slew of local areas suing to hold Exxon and other oil companies responsible for costs the plaintiffs estimate could run to billions of dollars.

Exxon’s filings laid out what appears to be a disconnect between the claims in the lawsuits and what the municipalities told their bond investors.

San Francisco’s lawsuit, for instance, suggested the city faces “imminent risk of catastrophic storm surge flooding” — yet a general obligation bond offering in 2017 claimed officials are “unable to predict whether sea-level or rise or other impacts of climate change… will occur.” 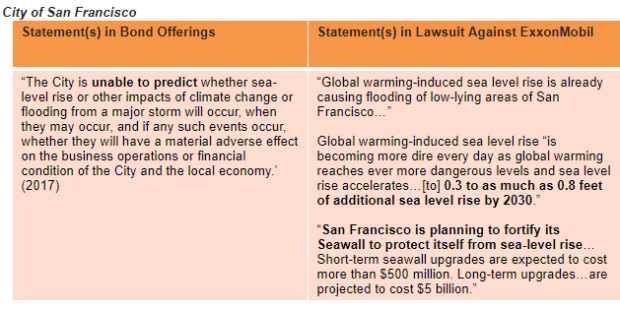 Santa Cruz County is experiencing extreme droughts, heat waves, torrential rain, and wildfires, and would almost certainly face apocalyptic flooding by 2050. A bond offering the county issued in 2017 paints a different picture. It mentioned only “unpredictable climatic conditions” as a possible risk factor. 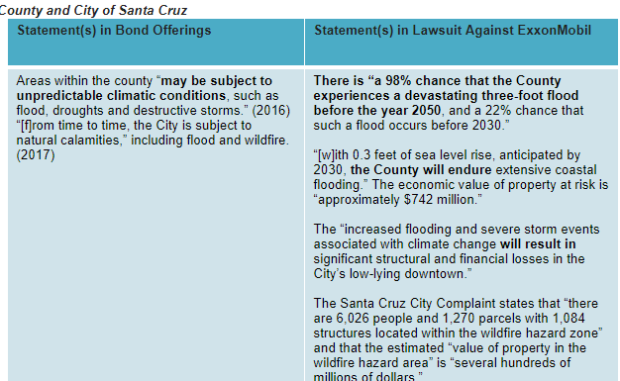 “Each of the municipalities warned that imminent sea level rise presented a substantial threat to its jurisdiction and laid blame for this purported injury at the feet of energy companies,” Exxon said in press statement shortly after filing the document in Texas. Activists and others have perforated Exxon for months with lawsuits targeting the company for contributing to climate change.

Exxon claimed the plaintiffs’ bond disclosures show officials are arguing in bad faith. “Notwithstanding their claims of imminent, allegedly near-certain harm, none of the municipalities disclosed to investors such risks in their respective bond offerings,” the company added.

Manufacturing lobbying groups blasted the bond disclosures. Linda Kelly, senior vice president and general counsel at National Association of Manufacturers (NAM), called it hypocritical for officials to shift argument only when it suited their needs.

“These seven California municipalities are taking energy manufacturers to court, blaming them for catastrophes they are sure will happen. But when it came time to secure money from investors, these cities failed to mention the certain risks they cite in their lawsuits,” Kelly wrote in a statement to The Daily Caller News Foundation.

Much of Schneiderman’s initial probe is based on reports from liberal-leaning media outlets InsideClimate News and Columbia University, both of which claim Exxon has known the risks of global warming for decades but kept such knowledge under wraps. The probe has come under intense scrutiny, especially among analysts who raise doubts about the research behind the pursuit.

Federal officials, for instance, criticized Susanne Rust, one of the lead researchers responsible for Columbia’s Exxon reports, in the past for allowing her environmental activism to dictate her research on the oil company. She has been responsible in recent years for research generating fear about other issues.

Regulators dismissed much of Rust’s research showing that an additive called BPA found in plastic bottles can poison foods and water. The Federal Drug Administration has researched such claims and found the chemical “contained no health risk.”