NBC announced Tuesday that they will definitely show players if they take a knee during the national anthem at the Super Bowl next month, according to The Hollywood Reporter.

“It’s certainly possible,” Fred Gaudelli, executive producer of the big game, said about the chances of players taking a knee in protest. “It was a pretty big story in our country this fall. We’d show it.” (RELATED: 49ers Player Calls Out Trump And Pence Over National Anthem Protests [VIDEO]) 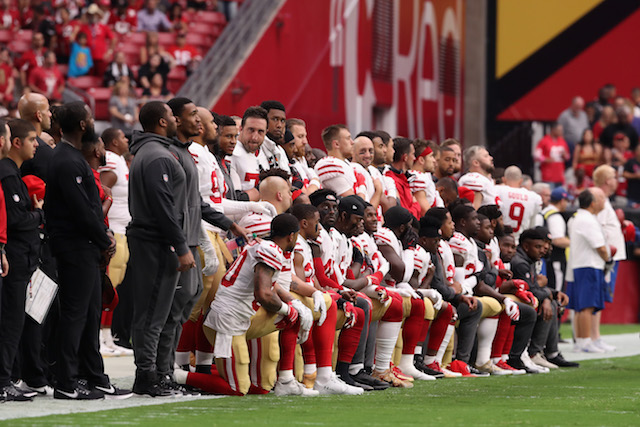 GLENDALE, AZ – OCTOBER 01: Members of the San Francisco 49ers kneel for the National Anthem before the start of the NFL game against the Arizona Cardinals at the University of Phoenix Stadium on October 1, 2017 in Glendale, Arizona. (Photo by Christian Petersen/Getty Images)

In addition, he defended the drop in attendance at games during the regular season.

“New York had a game in week 17 where it was 4 degrees outside,” Gaudelli explained about the New York Giants matchup against the Washington Redskins on New Year’s Eve. “Why would you go and sit in that when the Giants are 2 and 13?”

During the 2017 football season, networks have struggled with the decision whether to air the protests at the singing of the “Star Spangled Banner” after fans have responded by tuning out of games. The result has been a drop in ratings by an average of 9.7 percent this season amid the protests.