“Star Trek” actor Jason Isaacs attacked Ivanka Trump as a “brainless Barbie” on Twitter this week, adding that the first daughter is a “plastically enhanced, deeply mysogynist parody of a woman.”

Who knew a tweet could make you puke, piss yourself and spray snot all at the same time?#BrainlessBarbie https://t.co/xZiNDQ93H4

He later followed up Tuesday:

To the many critics who have challenged me for the #BrainlessBarbie hashtag in response to @IvankaTrump, an apology: you’re right. One’s a plastically enhanced, deeply mysogynist parody of a woman. The other’s Barbie.

This isn’t the first time the “Star Trek: Discovery” actor has used his Twitter account to deride Republicans, tweeting his support of the “take the knee” protest among athletes in September. (RELATED: ‘Star Trek’ Star Mocks Conservatives And Expresses His Support For #TakeTheKnee) 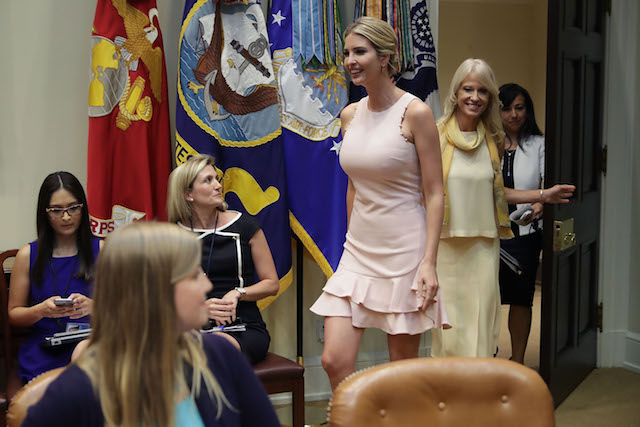 WASHINGTON, DC – AUGUST 02: Assistant to the President and Donlad Trump’s daughter Ivanka Trump and Counselor to the President Kellyanne Conway (2nd R) arrive for a listening session with military spouses in the Roosevelt Room at the White House August 2, 2017 in Washington, DC. The military spouses said the choose professions that they can practice no matter where their partners are stationed but that licencing and certification continues to be a challenge when moving to a new post. (Photo by Chip Somodevilla/Getty Images)

Many in the media and entertainment world have gone after Ivanka Trump, including a 2016 incident where she was harassed while sitting on an airplane with her children. (RELATED: Liberals Blame The Victim For Ivanka Harassment On JetBlue Flight)