On January 1, California initiated the down of legalized recreational marijuana use. That same day, a new California law regulating particle emissions from leaf blowers and lawn mowers went into effect. But cannabis users inhale thousands of times more small particles from smoking than they breathe in from outdoor air.

On November 8, 2016, California voters passed Proposition 64, legalizing the recreational use of marijuana for adults. Sale and taxation of recreational marijuana began January 1, 2018. California’s cannabis market is expected to soar to over $5 billion by 2020.

Particulate matter, or small particles, refers to PM2.5, classified by the EPA as particles smaller than 2.5 microns in diameter, much smaller than the eye can see. Particle pollution is a mixture of dust, nitrates and sulfates, metals, pollen, and organic chemicals. Small particles enter the lungs by breathing air containing particles emitted from industry and vehicles, but also from nature, such as pollen, as well as smoke from forest fires and tobacco or marijuana smoking.

Are airborne small particles harmful? Both the Environmental Protection Agency (EPA) and CARB have claimed that inhalation of small particles can cause premature death. A 2014 CARB fact sheet states:

CARB and EPA assert that the persons who breathe in small particles from outdoor air can die within a few hours of inhalation. But many studies find no association between small particle pollution in US ambient air and mortality.

As a result of health concerns, the California Air Resources Board has waged a war on small particles and other pollutants since 1967. Air quality standards for particles were established and updated in 1969, 1983, and 2002. The 2002 California standard for PM2.5 set a very low annual average of 12 micrograms of particles per cubic meter of ambient air. At that level, a person would inhale less than a teaspoonful of small particles over an 80-year lifetime.

The great news for US citizens is that our air ranks with the cleanest of any nation. The 1970 days of smog in Los Angeles, Cleveland, and Gary, Indiana are long gone. An example of improvement is the reduction in volatile organic compounds (VOC), one component of small particles, emitted by our vehicles. According to EPA data, vehicular VOC emissions are down more than 95 percent since 1970. The amount of small particles in our air is now so low that new regulations will have a negligible effect on the particles which people inhale. 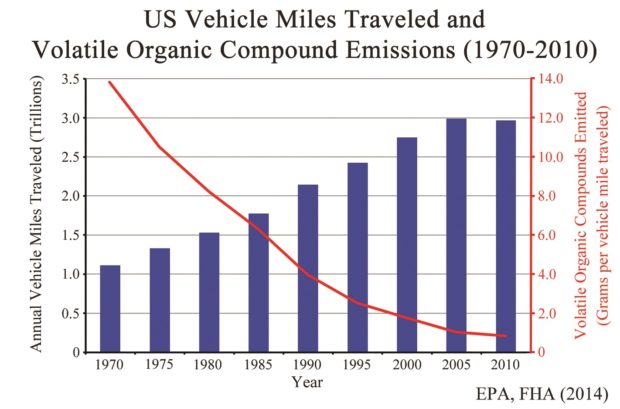 VOC and Vehicle Mileage Graph. Courtesy of and created by Steve Goreham

Smoking one marijuana cigarette exposes the inhaler to up to 160,000 micrograms of small particles, about four times the amount from a tobacco cigarette. A single joint delivers more small particles than breathing typical California ambient air for two years. Will California marijuana smokers be dropping from “short-term premature death” as feared by CARB?

In 2017, California experienced some of the worst forest fires in history. In just two days in October, Napa Valley fires produced about 10,000 tons of PM2.5, about the amount that 35 million California vehicles produce in a year.

Steve Goreham is a speaker on the environment, business, and public policy and author of the new book “Outside the Green Box: Rethinking Sustainable Development.”