The Pensacola, Florida branch of the Women’s March is banning the symbolic pink pussy hats to avoid offending transgender women and women of color.

The pussy hats made their debut during the Women’s March on Washington after Trump’s inauguration in 2017 and quickly became a symbol of modern feminism. However, the leader of the Pensacola march decided that the hats inherently represent “white feminism” and are are too transphobic and racist to be worn any longer.

In a statement posted to the Pensacola Women’s March’s Facebook page, the group argues that the hats assume that all women have pink vaginas, which represents a “very concentrated and thus, exclusionary sect of feminism.”

First, the hats are allegedly transphobic because they ignore transgender women who don’t have vaginas — otherwise known as men who identify as women but choose not to have transitional surgery.

“The Pink P*ssy Hat reinforces the notion that woman = vagina and vagina = woman, and both of these are incorrect,” the group claims.

Furthermore, the group considers the hats to be racist because they assume that all vaginas are pink, which is “white-focused and Eurocentric.”

“Therefore, we ask that march goers refrain from wearing this hat and instead, pick an alternative headwear that focuses on collective women’s liberation for ALL women: transgender women, multinational women, disabled women, queer women — the most marginalized,” the Pensacola Women’s March concludes.

The comments on the post quickly turned cannibalistic, as the more progressive members on the page shamed the women who refused to comply with the ban on the pussy hats.

“To disavow the struggle that trans people face under the system is a slap in the face of every person who supports the movement for equality,” Marissa McCaskill claimed. “I am heartbroken for our trans and queer community who are having to see the vile that is being spewed right now. Fuck your pussy hats.” 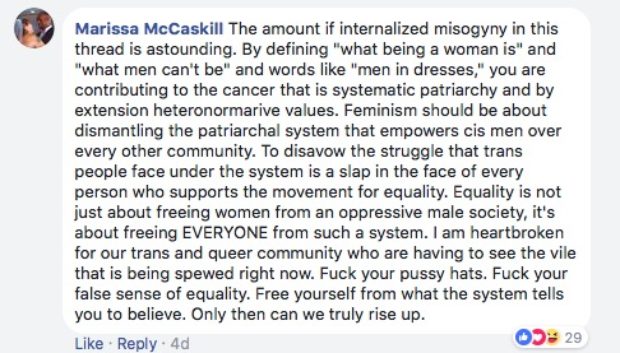 Marla Grassgreen replied that the hats were in response to the Access Hollywood tape that showed Trump saying he would grab women by their genitalia. 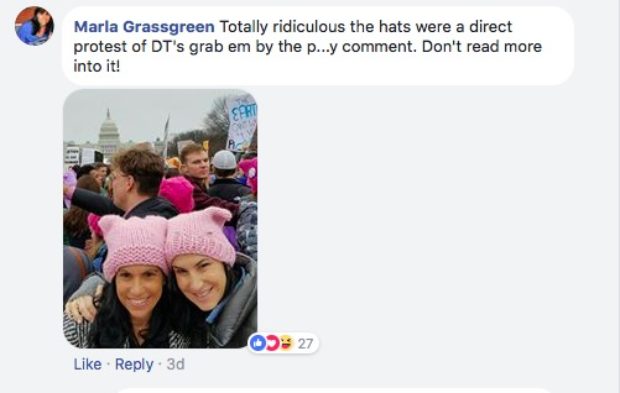 “Sometimes a knitted hat is just a knitted hat,” Anna Eleanor Jordan wrote before another commenter called her a “racist, transphobic white chick.” 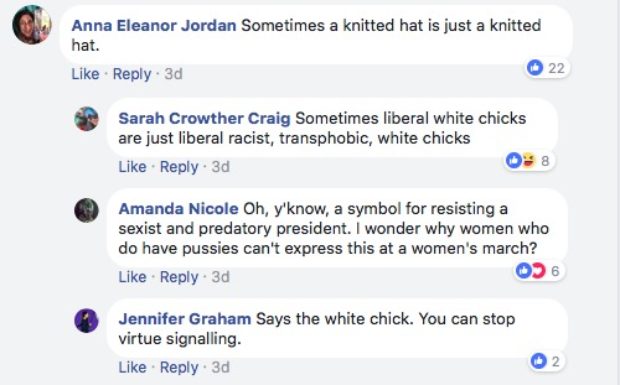 Devin Cole, the author of the post and leader of the Pensacola Women’s March, started trashing the women on the page who were defending the idea that womanhood is rooted in having female body parts. Cole un-ironically touted her 2016 graduation from the Women’s, Sexuality and Gender Studies department at the University of West Florida as a source of authority against the other members.

“I wrote this statement based off of years of research I have been working on and contributing to,” Cole whined. “If the petty bourgeoisie, white supremacist ‘feminists’ in Pensacola shitting their pants on this thread can’t realize that, then please feel free to stay the hell home.” 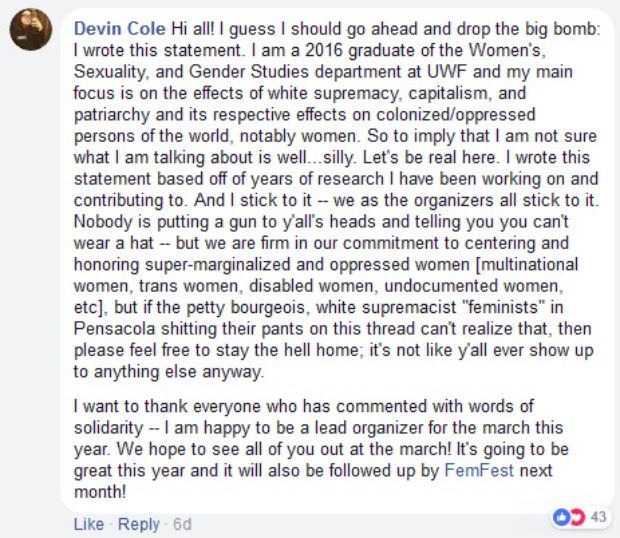 “It’s not like y’all ever show up to anything else anyway,” Cole scoffed.