CNN declared that MLK was an “environmental hero” and a socialist, “before it was cool,” in a tweet Monday morning.

The tweet was sent from the main CNN account with almost 40 million followers. The adjoining article in the tweet was entitled ‘Three ways MLK speaks to our time’ and features a breakdown of MLK’s relevance in today’s political climate. 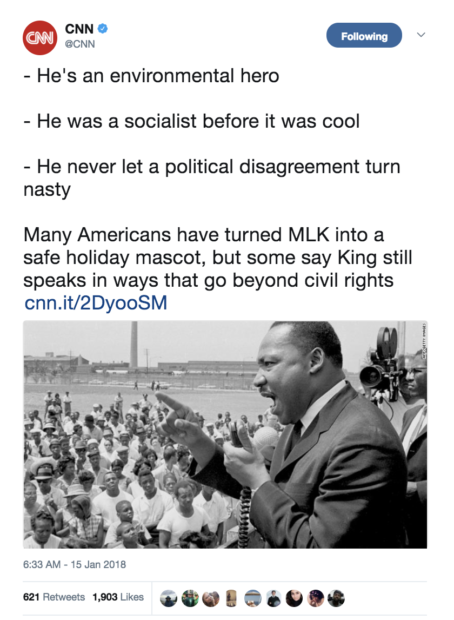 The article describes how some historians classify MLK as a socialist, and goes on to make the case that socialism is very hip these days for youths who “are developing a distrust of capitalism.”

No. 2: He was a socialist before it was cool

There was a time in American politics when calling someone a socialist was a slur. Not anymore, at least for many younger Americans who are developing a distrust of capitalism.

One of the most popular politicians in recent times is Vermont Sen. Bernie Sanders, a self-described Democratic Socialist who almost captured the Democratic nomination for president. A 2016 Harvard University poll said 51% of young Americans — 18- to-29-year-olds — oppose capitalism. And a poll conducted the next year by YouGov and the Victims of Communism Memorial Foundation found that most American millennials preferred to live in a socialist country than a capitalist one.

The reasons why some millennials prefer socialism have been documented. Lingering scars from the Great Recession; staggering student debt; the greatest economic inequality since before the Great Depression — all have contributed to an unease about capitalism.

A very odd look for a news company to call a political ideology “cool.”

Socialism has killed a lot of people.