“Star Wars: The Last Jedi” has garnered both praise from critics who lauded its departure from the franchise’s formula, and ire from long-time fans who say it missed the mark. Chief among the complaints, beyond the unbalanced pacing and needless subplots, concerned the movie’s heavy-handed progressive messaging.

To that end, an anonymous user—a troll with too much time on their hands—created a 47-minute cut of the film with its female presence drastically cut down. It’s a hundred minutes shorter than the actual movie, the cut is as linear as a bad dream and it focuses entirely on its male characters without any of the character development given to Rey—one of the The Last Jedi’s finer elements.

Called “The Last Jedi: De-Feminized Fanedit (aka The Chauvinist Cut),” the cut-down version is clearly intended to satirize the complaints about the movie’s heavy focus on Finn’s aimless sidekick, Rose (who’s referred to as “Asian chick” and “China girl), and the pink-haired admiral played by Laura Dern. Most of their scenes, along with Leia’s and Rey’s, are significantly reduced.

Just to make the joke obvious, the fight between Finn and Captain Phasma is cut down to Finn striking Phasma down with a single blow. The description reads:

“Women are naturally weaker than men, she isn’t force-sensitive, and we know nothing about any exo-skeleton in her suit.”

Despite having every indication of being a work of satire, the cut has sparked a backlash from the progressive media who are lamenting what they see as an insurgence of men’s rights activists in the geek community.

Writing for the AV Club on Univision’s network of sites, Sam Barsanti describes the hackjob as a “horrid, misogynistic fan edit,” and calls its creator an “enterprising creep” who “decided to put his frustrations to ‘good’ use and edit The Last Jedi into a movie that’s a bit more palatable to misogynists, racists, and overall idiots.”

Barsanti goes into significant detail about how the cut bunched up his underwear, describing it as “fucking shameful.”

Inverse’s Corey Plante went a bit further, arguing that the edit’s existence proves the need to have powerful women in Star Wars—as if Leia didn’t already exist decades ago. The article’s subtitle on Twitter reads: “We should all be outraged.” 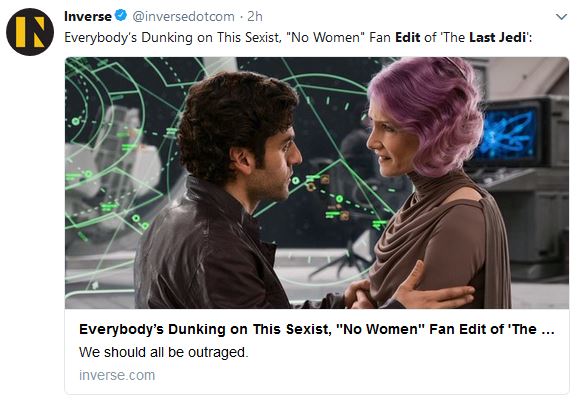 On Fast Company, Joe Berkowitz called the edit the “James Damore cut,” referencing the maligned Google engineer who was fired for publishing a memo questioning the company’s diversity initiatives.

Over on Twitter, Dragon Age writer David Gaider complained that the edit made him physically sick.

I’m trying to imagine the sort of man who’d take comfort from the ability to edit women out of existence or heroic narratives, and it’s making me a little nauseous. https://t.co/kfqT5g9kWy

His views were echoed by Polygon and CBR comic book critic Kieran Shiach, who “observed” that removing all of the strong women from the movie would cause the First Order to win—never mind that the good guys still win in the fan edit.

BuzzFeed editor Miriam Elder proposed banning men from the next Star Wars episode in response to the edit.

The Last Jedi’s own director, Rian Johnson, laughed at the edit. It was one of the few sane responses buried within an avalanche of outrage.

Everyone complaining about it should take a cue from Johnson.