Amena Khan, a blogger and model, was chosen by L’Oreal UK to model for the beauty company’s newest hair product campaign. The campaign features women in hijabs and argues that their products are still useful for people who do not show their hair in public.

“L’Oréal Paris UK are both proud and excited to be launching such a unique and disruptive campaign for the haircare market, a category which in previous years has been perceived as the cliché of beauty advertising,” Adrien Koskas, L’Oréal Paris UK general manager, said about the new campaign. (RELATED: L’Oreal’s New Hair Product Campaign Features Woman In Hijab)

However, a search of Khan’s Twitter account raises questions about the appropriateness of making her the face of the new campaign. Khan frequently espouses anti-Israel views, calling it a “terrorist” and “illegal” state.

“Remember: the brutal murder of Palestinians had been occurring MANY years before the formation of Hamas,” Khan wrote in July of 2014. “Israel’s excuses are blatant lies.”

“Well, under international law, Israel is an illegal state,” she wrote in the same month. 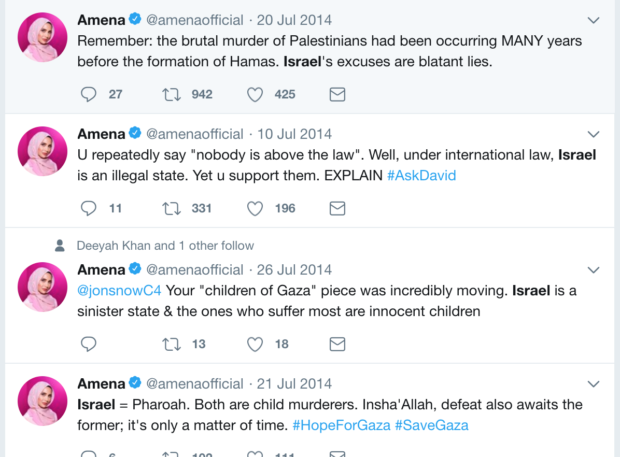 Khan accused Israel of being the sole creator of religious tension in the region, writing, “For CENTURIES Arabs, Jews & Christians lived peacefully side by side in Palestine. Until the creation of Israel.”

Khan also seemed to deny any provocation or violence on behalf of Palestine.

“Defending itself against unarmed civilians and babies?” she asked. “Israel is the 4th strongest military power in the world. Wake up.” 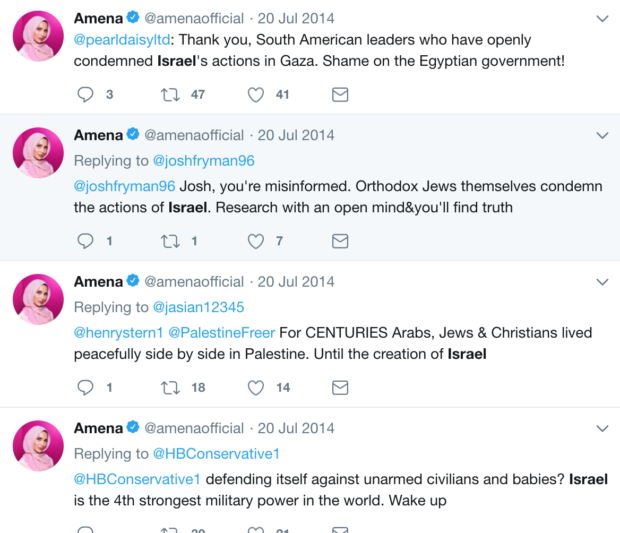 Amena wrote in other tweets that Israel is illegally occupying “Palestinian lands” and accused them of “terrorizing innocent civilians.” 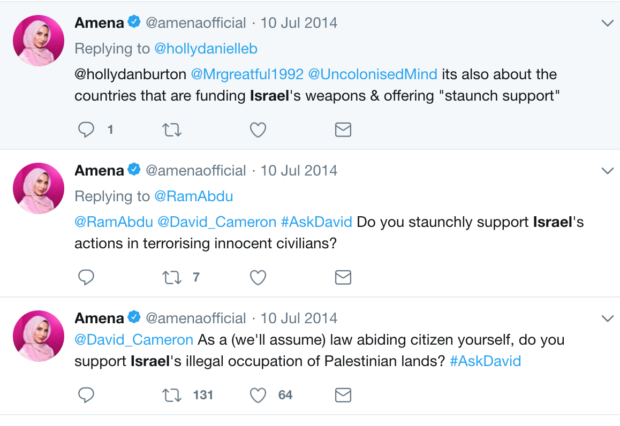 “You’re complicit in the supplying of weapons to a terrorist state,” she tweeted at then-British PM David Cameron. “You offered ‘staunch support’ of genocide.”