Last month, the National Association of Manufacturers (NAM) released a survey showing that nearly 95 percent of manufacturing companies are optimistic about the futures of their businesses and the economy. Count me among them.

The Dayton-based company that my sister Sandy Keplinger and I own — a contract metal fabrication company called Staub Manufacturing Solutions — just had an incredible year. Sandy and I expect an even better 2018. And, as is often the case in the history of American enterprise, our success is becoming everyone’s success. It is benefiting our employees and their families. It is helping our suppliers and customers. It is building our community and it is growing our economy: Dayton’s economy, Ohio’s economy and America’s economy. Increasingly, this kind of optimism is becoming the default for businesses across our country. That is no accident. As the NAM survey I mentioned showed, an important reason why manufacturers are so optimistic about the future is this: they see new policies from Washington that are finally freeing our country to succeed.

During the 2016 campaign, then-candidate Donald Trump came to Dayton to visit our company and meet with our team. 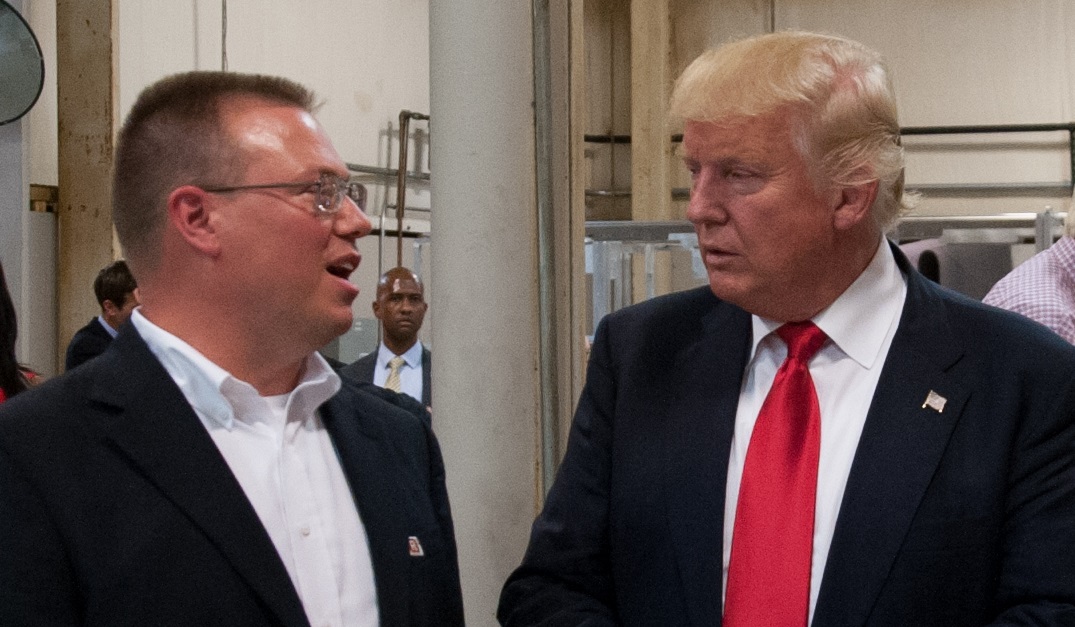 Courtesy of Steve Staub and the National Association of Manufacturers

We listened to his plans closely, but more importantly, he listened to us. He spoke with us to better understand the challenges we faced and what we needed to grow and create jobs.

On the president’s first day in office, I wished him good luck on behalf of the NAM. I said that America’s doers, makers and hard workers were ready to “power on” and “be the solution” to drive our economy forward. I expressed our hope that the president would be our ally in that mission.

Well, as we approach the one-year anniversary of his presidency, I think it is safe to say that he has. There is a lot to celebrate for manufacturers. That is certainly true at our manufacturing company. Optimism is skyrocketing. Customers are increasing orders. Some are looking to launch new products. And we are growing. We are adding new services. We are looking at many more investments. Just last week, we closed on the purchase of the building next door, which will increase the square footage of our company significantly.

Perhaps most importantly, as I mentioned earlier, this growth and optimism is translating into real benefits for the men and women who make our company run. We started off 2017 with 23 team members, we now have 35, and we are still looking to hire more! I was proud to be able to give each of our employees a larger Christmas bonus this year, which I know helped make the holidays just a little bit brighter in several Dayton households, and I’m excited to report that we are giving every employee a pay raise as well!

This is a story that is repeating itself across the country. You have probably seen similar anecdotes about companies expanding, or compensation increasing, or workforces growing—sometimes all three at once, as with Staub. You may be seeing these benefits yourself. I hope you are. This is the real-world impact of what our politicians do in Washington. Washington doesn’t control our economy. American workers and companies are the engine that drives us forward. But here’s what Washington does do: It can choose to advance policies that make it harder for our economy to grow, or it can choose to advance policies that make it easier. Over the past year, we have seen a raft of policies that make it easier. Tax reform is obviously at the top of the list. It represents the biggest change to the federal tax code in more than 30 years. It is such a big deal that even the anticipation of it was helping drive the sky-high manufacturing optimism I mentioned earlier. I know that was certainly the case with us at Staub. That is because tax reform benefits small businesses like ours in so many ways. It lowers our overall tax burden. It offers new incentives to purchase equipment and frees up money to hire more employees. And, critically in today’s fast-paced global economy, it finally puts American manufacturers like ours on a more equal footing with foreign competitors.

We appreciate the strong support of President Trump and dedicated representatives in Congress like Sen. Rob Portman and Congressman Mike Turner in the effort to help manufacturers ship and sell overseas more of what Americans make here in our factories. However, tax reform isn’t the only positive change out of Washington. Regulatory reform, for instance, has also been incredibly important to companies like Staub. It is hard enough for large companies to keep up with the avalanche of regulatory paperwork coming out of Washington. It is even harder for small manufacturers like us. So, the new focus on making regulations smarter, along with ending or updating the duplicative and punitive rules that hold our economy back, is helping drive this optimism as well.

I realize I am a little biased on the matter, but I have always thought it would be a good idea to try a businessperson in office. Well, so far, as we at Staub Manufacturing Solutions look back over the first year of the Trump presidency, we see many positive changes coming out of Washington. Of course, there are things we wish had been done differently. Of course, there are more policies that will be needed to continue driving manufacturers’ optimism and our economy forward. Nearly every manufacturer I know would welcome a bipartisan infrastructure package. A renewed focus on expanding free and fair trade that has been beneficial to manufacturers would be welcomed as well, especially one coupled with a push to open more markets to goods stamped “Made in the USA.” I hope the president, his administration and Congress will consider policies like these as we look toward the second year of the Trump presidency.

In the meantime, we at Staub will keep doing our part to drive the economy forward.