Agriculture is under attack. Environmentalists label modern farming as unsustainable, blaming farming for polluting the planet and destroying the climate. But today’s food is abundant and nutritious—a modern agricultural miracle.

From 1961 to 2013, world population more than doubled from 3.1 to 7.2 billion. But agricultural output more than tripled over the same period, according to data from the United Nations. We are slowly winning the battle against world hunger. The percentage of chronically undernourished people has fallen from 30 percent of world population in 1950 to about 11 percent today.

Not only the quantity, but the quality and variety of food are much better than in past ages. A 2015 study at Stockholm University compared modern food to recipes from the chef of King Richard II of England in the 1300s. The study concluded that people of today’s developed nations eat better than the kings of old.

Today’s foods are a product of thousands of years of efforts to cultivate more abundant and more nutritious crops. Cross-pollination of plants, cross-breeding of animals, and now genetic engineering of plants and animals continues to deliver rising farm output with better food quality and variety. Grains, fruits, vegetables, meats, dairy products, and even seafood continue to improve due to advanced farming techniques.

Agricultural production accounts for a staggering 70% of global freshwater consumption, 38% of the total land use, and 14% of the world’s greenhouse gas emissions…The use of agrochemicals is related to ecotoxicity, eutrophication and depletion of phosphorus stocks. Intensive agriculture is related to substantial energy use. The loss of soil and biomass carbon can contribute to climate change.

The attacks on agriculture are too numerous to address in a single article, but one aspect of modern agriculture is not well known. Farmers are now giving land back to nature.

According to UN data, land used for farming is now declining. Total world agricultural area, the sum of crop land and pasture land, peaked in 2000 at 4.95 billion hectares and declined about one-half percent through 2013. Over the same period, world agricultural production increased 37 percent. The recent decline in total farm land use occurred despite 41.3 million hectares added for biofuel production, an area larger than Germany.

An astounding improvement in agricultural yields provides rising output without the need for additional land. 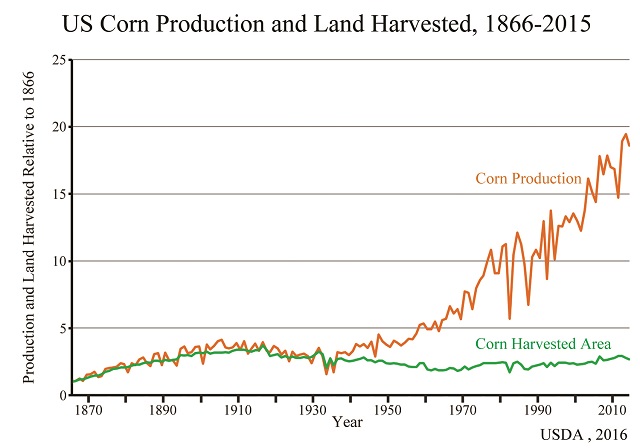 The world has passed the point of peak agricultural land use. Today, farmers are feeding the growing world population and providing us with the best food in history, while at the same time returning land to nature.