Donald Trump Jr. made sure that Thursday was a very bad day for Democrats and their anti-GOP tax cuts messaging.

In an appearance with Nancy Pelosi, Debbie Wasserman Schultz claimed Thursday that $1,000 bonuses each month for American families as a result of the GOP tax cut doesn’t “go far for anyone.”

At the same event, Nancy Pelosi doubled own on her insinuation that $1,000 in extra salary for American families each month are “crumbs.” Pelosi compared the boost in salary to a “little piece of cheese” in a mouse trap:

“There’s a little mouse trap who’s got a little piece of cheese on there and there’s a mouse about to take it and that’s called the middle class. And around it are fat cats, they look a lot like elephants but anyway, around there. And that’s the thing. Get this little thing and we get this big bonanza. You get the crumb, we get the banquet.”

On January 11th, Pelosi first referred to the bonus that corporate America receives as “crumbs.”  She said that the “crumbs [corporate America] are giving to workers to put the schmooze on is so pathetic,” during a press conference.

The two comments were very poorly received online, with even the President’s son, Don Jr. jumping into the fray: 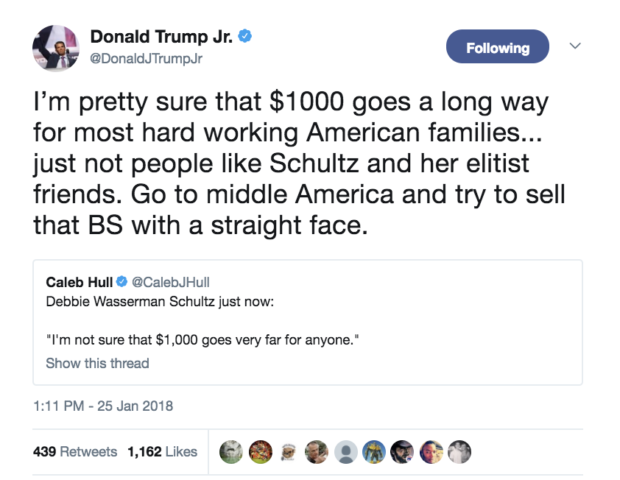 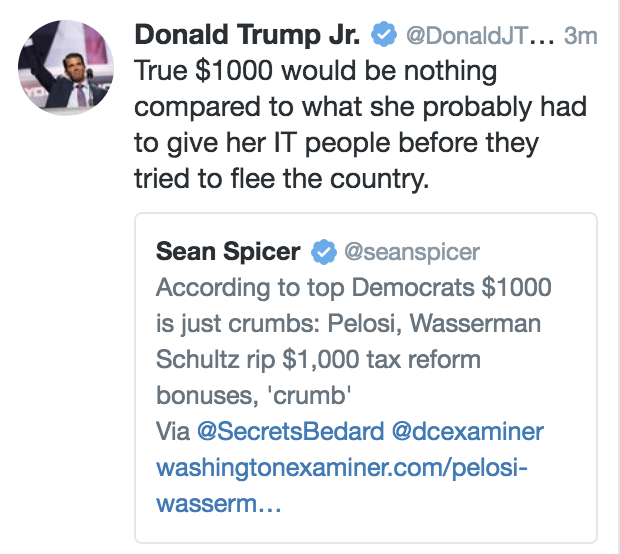 According to The Daily Caller News Foundation:

Florida Democratic Rep. Debbie Wasserman Schultz’s top information technology (IT) aide was arrested Monday attempting to board a flight to Pakistan after wiring $283,000 from the Congressional Federal Credit Union to that country.

He attempted to leave the country hours after The Daily Caller News Foundation’s Investigative Group revealed that he is the target of an FBI investigation, and the FBI apprehended him at the airport.