Pelosi has now referred to bonuses, pay raises and tax breaks for American workers as “crumbs” on three separate occasions while criticizing the GOP tax reform bill passed in December.

Pelosi called it “obnoxious” that workers are grateful for the extra money in their pocket and included an image of a worker getting a crumb from an elephant. Pelosi said:

Pretty obnoxious the GOP thinks workers should be weak-kneed with gratitude for corporations giving them pennies while pocketing a multi-billion dollar tax break stolen from the future of the middle class. #GOPTaxScam 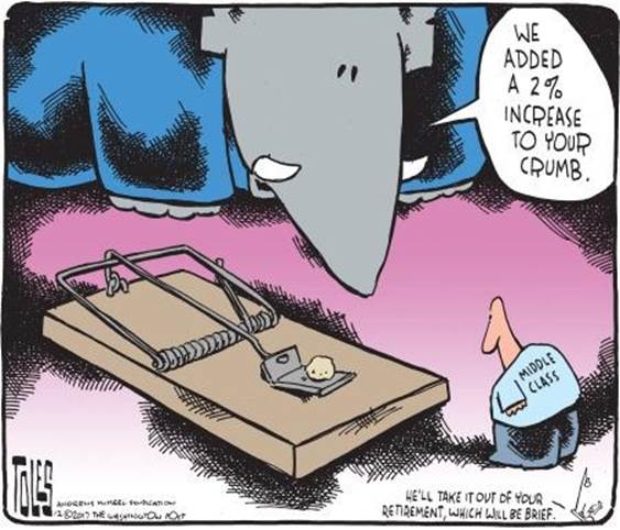 The tweet higlights an odd week of messaging for Democrats on the GOP tax cuts.

Pelosi insinuated that $1,000 in extra salary for American families each month are “crumbs” twice in the past few weeks. The House Minority Leader then compared the boost in salary to a “little piece of cheese” in a mouse trap on Thursday:

“There’s a little mouse trap who’s got a little piece of cheese on there and there’s a mouse about to take it and that’s called the middle class. And around it are fat cats, they look a lot like elephants but anyway, around there. And that’s the thing. Get this little thing and we get this big bonanza. You get the crumb, we get the banquet.”

On January 11th, Pelosi said that the “crumbs [corporate America] are giving to workers to put the schmooze on is so pathetic,” during a press conference at the US Capitol.