Standing on the steps of Lincoln Memorial this past Saturday, I found myself surrounded by pink-clad protesters armed with every kind of sign and symbol imaginable. Promoting issues like LGBTQ rights, DACA and the Dreamers, pro-choice, environmental regulation, gun control, and the impeachment of President Trump, I was left uncertain as to what this group of thousands was intending to put forth as their primary message.

My uncertainty as to the goals of this movement are mirrored by its equally confused media coverage. A simple Google search elicits results that describe the March as having a myriad of different purposes, including gender equality, increased rights for women of color, Trump’s impeachment and a “blue wave” of Democratic electoral wins in the November mid-terms. It seems that despite their name, this movement has embraced an all-encompassing platform of liberal ideology, without a particular emphasis on women or women’s issues.

While their website sings the praises of a movement centered on “Unity Principles,” their movement is so far from unified that they cannot even present a singularly accessible slogan. While “Power to the Polls” was presented as the motto of the 2018 effort, it was accompanied by extensive promotion of the slogan “Together We Rise.” This also served as a not-so-subtle promotion of a book by the same title, authored by the March’s leaders, who described the tome as a “front-row seat to one of the most galvanizing movements in American history.”

The idea that the Women’s March is meant to unify and empower women is one that is singularly untrue. Beginning with the 2017 March, it was made clear by March leaders and participants that white women (or at least those who weren’t willing to verbalize their shame at being such), conservative women, and pro-life women were not welcome as part of their message. Instead of supporting the incredible passion and power of women from all political, racial, and socioeconomic backgrounds, it seems that the Women’s March is meant to be a source of unity and empowerment only for women who meet their political, ideological, and demographic expectations.

The 2018 March showed little improvement, continuing to exclude women unwilling to fall in line with the entirety of their platform. Had I decided to don an article of pro-conservative clothing this past Saturday rather than the ubiquitous pink kitten ears, I have no doubt that I would have been harassed mercilessly, despite being a woman seemingly there in support. This demonstrates a singularly narrow-minded view that any conservative woman, or indeed any individual not in line with their holistic message, must disagree with them across the board and be viewed as the opposition. This “either you’re with us, or you’re against us” mentality cannot be successful in a world that is increasingly bipartisan, and will not resonate with a millennial generation that is growing continually more moderate. Far from a unifying effort, these actions show a much more divisive, polarizing, and inflexible intention as the Women’s March true foundation.

With this in mind, it begs the question, what are this movement’s true goals? Do pro-life, female Dreamers not deserve the support of this movement? What about a pro-choice woman of color in favor of decreased gun regulation? Does supporting a women who chooses to favor the use of fossil fuels not fall under the cause of female empowerment? It seems to be that this is nothing more than a pro-liberal wolf hiding behind the mass appeal of pro-female sheeps’ clothing. 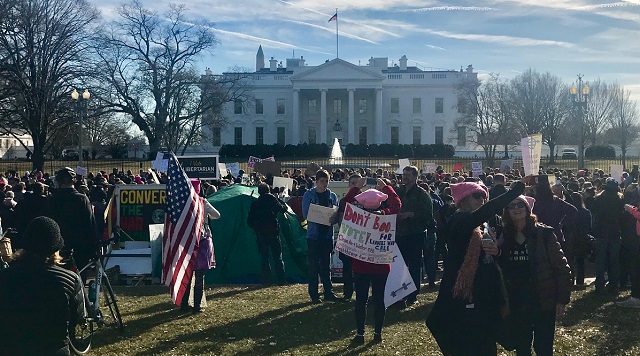 The Women’s March movement’s lack of focus on women was also evidenced by the display of speakers at the Washington, D.C. Women’s March. While speakers were indeed female, the emphasis was placed on providing attendees with political action-items: advocate for DACA, write your congressman, vote blue, hate Republicans. Anyone viewing this with a critical eye could understand that the Democratic Party has struck a goldmine of easily manipulated political capital. Devotees of this movement are falling for an emotional appeal underlaid with a carefully constructed fury against the Trump administration. Encouraging this demographic to vote, run for office, and support these initiatives in the name of female empowerment is the ultimate smokescreen of agenda setting under a false premise. Thousands of women are allowing themselves to become patsies of the corrupted big-government swamp that they claim to be working to rid themselves of. The conglomeration of seemingly disconnected messages begins to make sense when viewed through the lens of the goal to “elect Democrats.”

The Women’s March had the opportunity to bring together women of all backgrounds, political beliefs, races and socioeconomic statuses in a show of solidarity after multiple years of increased racial tension, partisan animosity and rising government power. Instead, this movement produced a sloppily organized, poorly formed, and confusing effort that used their very supporters as unknowing pawns in a bigger political game. Far from being a resource for women, it has instead disrespected them, implying with these actions that women are gullible and can be used baited and used for political advantage. I hope that the rest of 2018 brings movements that are genuinely inclusive, and that stand up for the empowerment of women across the aisle, without an underlying agenda.