A TAN LEATHER ARMCHAIR IN AN UNDISCLOSED LIVING ROOM IN WASHINGTON –Everyone has pale, fat-faced days in the world of TV. And Brian Stelter, host of “Reliable Sources,” is having one. Attention CNN makeup artists: Bronzing powder?

Welcome to CNN’s media show, the program that is supposed to cover the media, but instead has a pointed agenda that takes a blatantly biased view against President Trump and his White House instead of actually covering the media.

Stelter starts out with one of his staple features – shitting on Fox News. He says Fox News always finds a way to skewer Special Investigator Robert Mueller.

I don’t blame him for mocking Fox News’s Sean Hannity this week, who made an idiot of himself by quickly shifting to an O.J.-style car chase when the news wasn’t quite what he thought it was regarding a NYT report that Trump tried to fire Mueller last June. But the fact that Brian does it week in and week out is makes it all so blasé.

Brian has had an ongoing war with Hannity – which is fun, the two regularly bash each other’s brains out. This is entertaining. Just wish we could see them together in one setting. 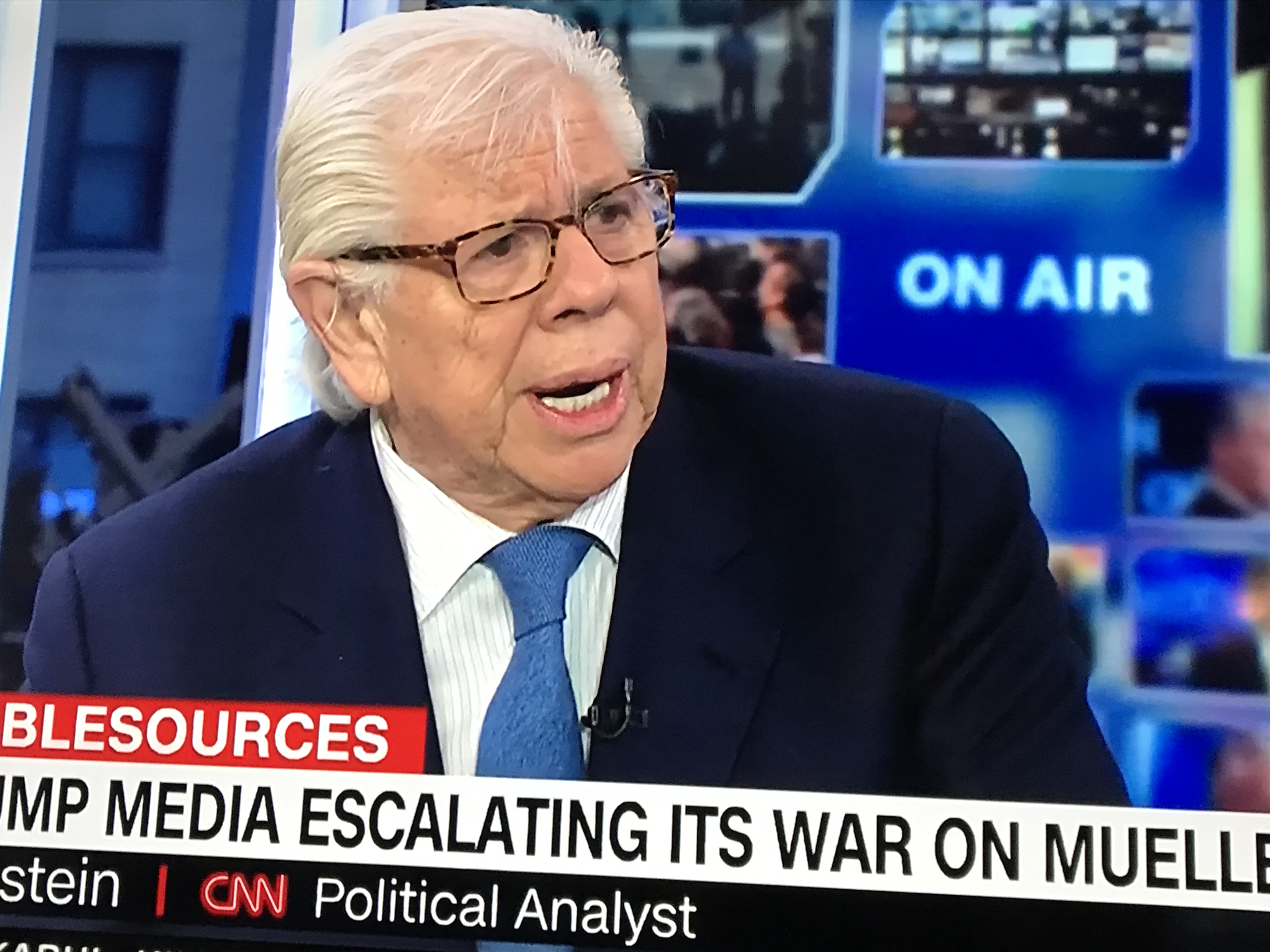 CNN’s blathering Carl Bernstein is in studio today instead of being zapped in from room of bookshelves in the Hamptons. He’s never going to stop yapping. If only there was a large gong or duct tape to stop him. (And no, I’m not suggesting that anyone purposefully injure a 73-year-old man.)

Despite reports on Fox News, Bernstein says his secret sources — the good reporters — over at the network believe the investigation against Trump is “serious.”

“I think we’re going to see Mr. President, you have got to stop demeaning this investigation,” says Bernstein.

Calmes points out that Fox News’s mocking the story of Trump trying to fire Mueller was absurd. She has good insight. She formerly worked for the NYT.

“You know these stories don’t get in the New York Times unless they’re real. …Yes, there were four anonymous sources, but I can tell you, you know, the editors know who those sources are before a story that explosive goes in.”

I like Commentary Mag’s Noah Rothman’s color scheme – medium gray suit, maroon tie with tiny polka dots – but I’m not too interested in anything he has to say yet. Let’s hope his thoughts become more memorable as the minutes pass. (Yaaaawwwn.)

It’s the second segment, and Brian is still talking about Trump trying to fire Mueller last June. What else don’t we know, Brian profoundly wonders.

Rep. Eric Swalwell (D-Calif.), a TV-savvy lawmaker, is on the show today. His name is a mouthful. His hair isn’t looking so helmet-y today. He’s got his locks slightly slicked, which isn’t half bad on him.

Brian wants to know what effect Fox News has on the country. He’s basically giving the congressman a carte blanche to dump on FNC.

It’s only 11:22 a.m. but I already feel like I’m waiting for anything exciting – or even just NOT BORING — to happen on today’s show. I’m so anxious for it to be over that I want to jump out of my skin. But I can’t disappoint the loyalists who read this column — or make them actually watch the show. (And yes, if you must know, this truly is a sacrifice for me.)

Swalwell talks about “conspiracy theories” perpetuated by the likes of Sean Hannity and Fox News to protect the president. He says it’ll affect the credibility on law enforcement when they testify.

Swalwell says we have “a duty” to protect the ballot box and that we need to protect the country from Russia repeatedly hacking the U.S. He says Republicans – i.e. Fox news — are doing nothing to issue reforms in this matter.

Thankfully something about Jay-Z is coming up. Perhaps we can all stop snoring our way through this show. Trump is tweeting about the hip-hop artist, which puts him front and center in Brian’s brain. Trump says black unemployment has improved under his presidency.

CNN’s Van Jones interviewed Jay-Z and is on the program today. Van is likeable – this should give us a brief shot of caffeine.

Van has a lot of pink going on today – light pink button-down and rosy pink tie.

The decline in black employment began in 2011. Trump took office in 2017. You get the idea — Trump bragging about this is ridiculous.

“I am happy to give Trump credit for not screwing it up,” Jones says, adding that it’s not enough to make up for Trump’s “shithole countries” remark against African nations and his jabs against football players taking the knee.

Jones says Trump ought to follow Jay-Z’s model – being vulnerable and confessional and talking about mistakes he has made in his marriage.

Jones repeats his point that Trump ought to be more like Jay-Z. Stelter then asks who his next guest will be and Jones shuts him down cold.

Amy Goodman, host of Democracy Now!, is on the show to discuss the president’s immigration policy. Goodman has a lot of energy for a Sunday morning.

She’s talking about specific people who fear being deported. She says the media ought to go interview these people.

“There’s nothing more powerful when you hear a young Honduran child or a Mexican mother… people who have lived here for decades and you hear them telling their stories,” she says.

She points out that former President Obama deported more people than all presidents before him combined. She says it laid the groundwork for the “intensification” under Trump.

Whoa! Brian ends the show with quite a closer with a man who threatened to kill CNN employees.

“Fake news, I’m coming to gun you all down,” a man in Michigan told CNN back in January.

He has thankfully been charged in federal and district court.

Brian says the Pope “even took to Twitter” to defend journalists from the “fake news” moniker.

Brian is at his most irritating when he gets all lecture-y – even when he’s making valid points. He says it is the “best of times” for investigative journalists – like the one who uncovered the criminalities of the creepy gym coach who sexually abused a slew of women.

He says we must also remember the “dark times” that we find ourselves.