The deputy director of the FBI, Andrew McCabe, is stepping down, according to a breaking report by NBC News.

NBC’s Peter Alexander reported Monday that McCabe will be stepping down from his position. 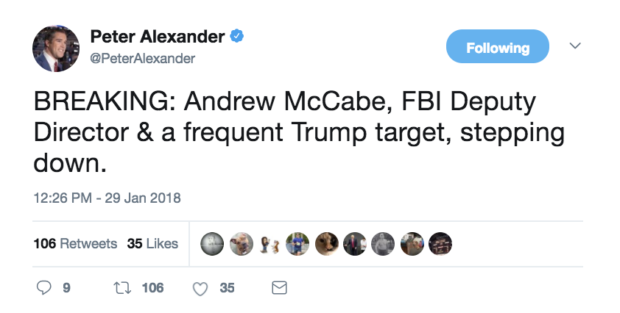 The bombshell is good news for Trump, who has had a combative relationship with the FBI deputy director.

McCabe became the acting director of the FBI after then Director James Comey was dismissed by President Donald Trump. The move was a controversial one and has led to friction between Trump and the investigative agency. At the time of this report, there was no official reason given to McCabe’s departure.

McCabe experienced intense criticism from the president and some in the press for his role in the Hillary Clinton investigation. McCabe’s wife received considerable campaign contributions from a Hillary Clinton-linked group when she ran for office in Virginia in 2015.

Trump has attacked McCabe for the connections.

And for his retirement plans.

McCabe had announced his intention to retire this spring. The announcement Monday moves his departure up considerably.