President Donald Trump called attention to the horrors of the North Korean regime during his State of the Union Address Tuesday night, stressing that the regime’s depravity highlights the threats the world faces.

“No regime has oppressed its own citizens more totally or brutally than the cruel dictatorship in North Korea,” the president said, adding, “We need only look at the depraved character of the North Korean regime to understand the nature of the nuclear threat it could pose to America and our allies.”

Trump warned that North Korea’s “reckless pursuit of nuclear missiles” may soon threaten the U.S. mainland. North Korea tested intercontinental ballistic missiles with the theoretical ability to range the continental U.S. last year, as well as a hydrogen bomb, but more testing is required for North Korea to field a reliable nuclear arsenal.

Nonetheless, North Korea is making progress at an accelerated rate.

“We are waging a campaign of maximum pressure to prevent that from happening,” Trump stressed, further stating that he will not make concessions or be complacent, nor will he “repeat the mistakes of past administrations that got us into this dangerous position.”

The president also stressed that the U.S. will possessed unmatched conventional military and nuclear capabilities. “As part of our defense, we must modernize and rebuild our nuclear arsenal, hopefully never having to use it, but making it so strong and powerful that it will deter any acts of aggression,” he stressed.

To highlight the brutality and depravity of North Korea, Trump put victims of the Kim regime in the spotlight.

The president first called attention to the death of Otto Warmbier, “a hardworking student at the University of Virginia” who “was arrested and charged with crimes against the state” while on a tour of North Korea. “After a shameful trial, the dictatorship sentenced Otto to 15 years of hard labor, before returning him to America last June — horribly injured and on the verge of death.  He passed away just days after his return,” Trump said. 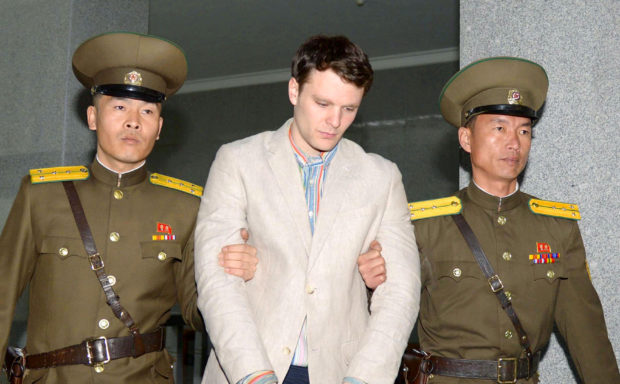 Otto Frederick Warmbier (C), a University of Virginia student who was detained in North Korea since early January, is taken to North Korea’s top court in Pyongyang, North Korea, in this photo released by Kyodo March 16, 2016. Mandatory credit REUTERS/Kyodo/File Photo

Otto’s parents, who claim that he was brutalized by the regime, were in the audience at the speech. As Trump comforted the slain college student’s parents, they could barely keep their composure.

Trump also introduced Ji Seong-ho, a daring North Korean defector who traveled hundreds of miles on crutches just to get away from the Kim regime. He suffered starvation, lost limbs to a tragic accident, and was tortured before he could escape to freedom. While he fled with most of his family, he left without his father, who was tortured to death by North Korean authorities. 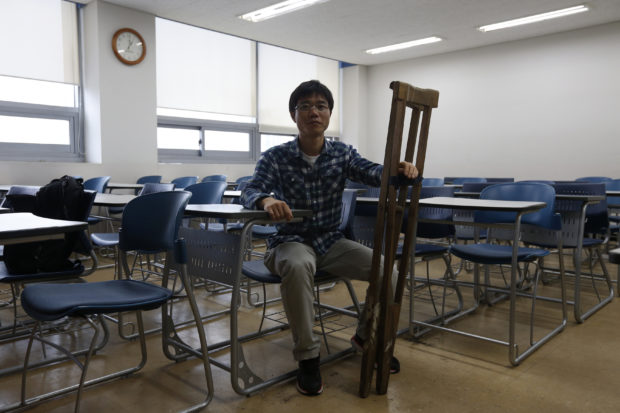 Ji Seong-Ho, 31, who is a North Korean defector living in South Korea and president of Now, Action and Unity for Human Rights (NAUH), poses for a photograph with his handmade wooden crutches, which were used to cross the Tumen River on the border with China, during an interview with Reuters in Seoul, May 29, 2013. From the streets of Seoul to the European parliament a new generation of North Korean defectors is stepping into the limelight, telling their personal stories to highlight the human rights abuses in their homeland. Picture taken May 29, 2013. REUTERS/Kim Hong-Ji

“Seong-ho’s story is a testament to the yearning of every human soul to live in freedom,” Trump said, adding that his “great sacrifice is an inspiration to us all.”

He raised his crutches high when Trump introduced him.