Brian Karem is the White House correspondent for Playboy, executive editor for local Maryland newspapers, and a liberal CNN political analyst, is not an expert on American history. During the State of the Union Address, Karem thought he’d caught President Donald Trump making a mistake when he said the motto of the United States is “In God we trust.” Karem tweeted, “Our motto is “in God we trust.” – WRONG. Our motto has been E Pluribus Unum – out of many One.” He was wrong, and people immediately pounced. 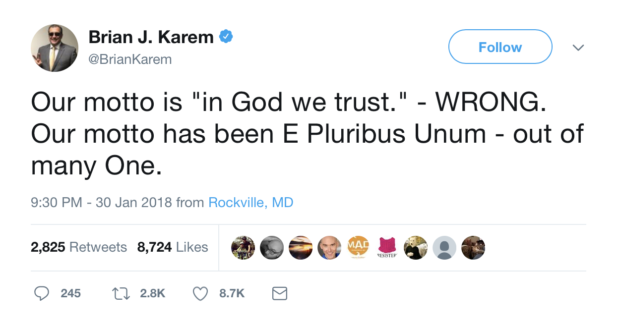 I thought the same thing. It was changed in 1956 officially to “In God We Trust.” I just looked it up. pic.twitter.com/9Y6ctNC6Ga

All you had to do was Google it… pic.twitter.com/BYEjU7grN1

It literally says “In God trust we trust” behind and above @realDonaldTrump on the back wall the ENTIRE time he is talking. Almost as if it was some kind of motto, or something.#SOTU

In God We Trust has been the official motto of the United States since 1956.

Maybe you should research before commenting. it helpshttps://t.co/fbnxpJKRlJ

OMG you’re an executive editor & you did t know this? God help us

E Pluribus Unum was the de facto motto of the United States until 1956 when we officially adopted “In God We Trust”. Check your facts