Liberal pundits are making jokes about the fact that a train filled with Republican congressmen collided into a trash truck, despite the fact that one person died during the incident.

The train crash occurred Wednesday morning in Virginia, and it was initially unknown if any of the congressmen were injured in the accident. The train reportedly slammed into a trash truck that made its way onto the tracks. One person in the truck was reported dead while two were reported injured–there were no serious injuries to any of the train passengers, which included young children.

Before it was clear that no one on the train was injured, Sam Stein, a Daily Beast writer and frequent MSNBC guest, joked that the crash is a “metaphor” for the Republican Party.

“Cmon,” he wrote. “Did they stage this metaphor?”

Stein quickly deleted the tweet, apparently realizing he was about to face some major backlash. He explained on Twitter that he deleted it because he realized it was “insensitive” but claimed he only tweeted it upon news that no one on the train was injured.

I erased it a while ago because I thought more about it and thought it was insensitive.

I initially tweeted it on the news that no one was hurt. But then figured that those reports could be premature. So I felt it was best to take it down

Keith Boykin, a CNN political commentator, also jested that the crash is a “metaphor for American politics.”

“A train carrying Republican members of Congress hits a truck near Charlottesville,” he wrote. “Or is this a metaphor for American politics today?”

A train carrying Republican members of Congress hits a truck near Charlottesville. Or is this a metaphor for American politics today? pic.twitter.com/eYEODty8UJ 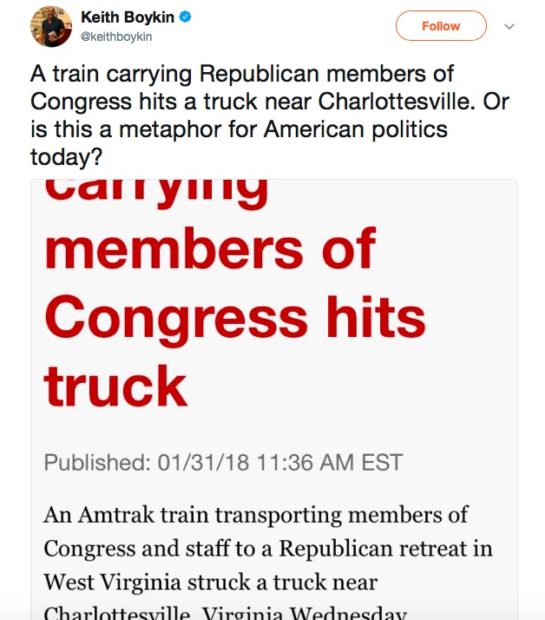 Palmer Report used the opportunity to call the GOP “trash,” suggesting that the train was the vehicle carrying garbage as opposed to the truck the train hit.

“Train full of republican congressmen collides with garbage truck,” the tweet read. “No one was injured in the vehicle that was transporting trash. No word on the garbage truck.”

Train full of republican congressmen collides with garbage truck. No one was injured in the vehicle that was transporting trash. No word on the garbage truck. pic.twitter.com/rnjB1gP5iV

Jonathan Tasini, a liberal strategist for Bernie Sanders and a frequent CNN commentator, laughed that the train crash seemed to be an attempt by God to “clean up the stink.”

Wow, btwn train full of Goopers hitting truck and this, God is working hard today to clean up the stink. Thank her. #TreyGowdy #goptrainwreck https://t.co/pJd12h5jqr 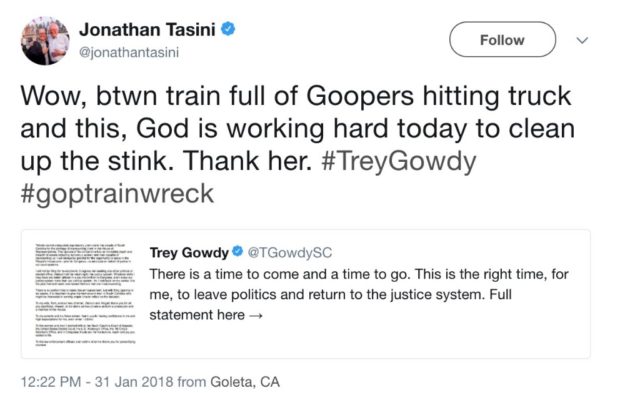 Even neo-conservative Bill Kristol got in on the action, insisting that because no one actually on the train was injured its okay to make jokes about the accident.

We’ve officially not only lost our minds but anything remotely resembling a moral compass. @BillKristol – take a bow. pic.twitter.com/e4OFsmCPYi