A source in direct contact with the FBI has provided The Daily Caller with a copy of the farewell party flyer for former assistant to FBI Director James Comey, Josh Campbell, which informed attendees they could celebrate his new position at CNN, where he would “[defend] the Bureau” on air. 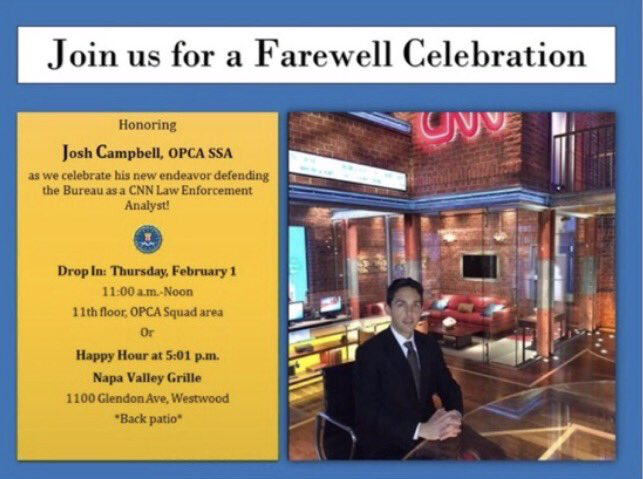 Copy of the Flyer obtained by The Daily Caller

The flyer was distributed to all FBI employees at the Los Angeles bureau on the afternoon of January 29, 2017, and was provided to TheDC by a source in direct contact with those employees.

The FBI declined to comment on the flyer, saying the bureau does not confirm or deny any official or unofficial communications.

CNN did not respond to TheDC’s request for comment.

Campbell authored a Friday op-ed for The New York Times declaring that he was leaving the bureau “so [he] can join the growing chorus of people who believe that the relentless attacks on the bureau undermine not just America’s premier law enforcement agency but also the nation’s security.”

CNN then announced Campbell as a law enforcement analyst Monday during his debut on the air.

Campbell also took aim at Republican House intelligence committee members for authoring a recent memo showing alleged political abuse of surveillance powers by top officials at the FBI and the Department of Justice.

“These political attacks on the bureau must stop,” he wrote. “If those critics of the agency persuade the public that the F.B.I. cannot be trusted, they will also have succeeded in making our nation less safe.”

The op-ed drew praise from Comey who lamented Campbell’s resignation from the FBI and added that his “voice is an important addition to the national conversation.”

Special Agent Josh Campbell will be missed at the FBI, but his voice is an important addition to the national conversation. @joshscampbell https://t.co/TETeRrou8C